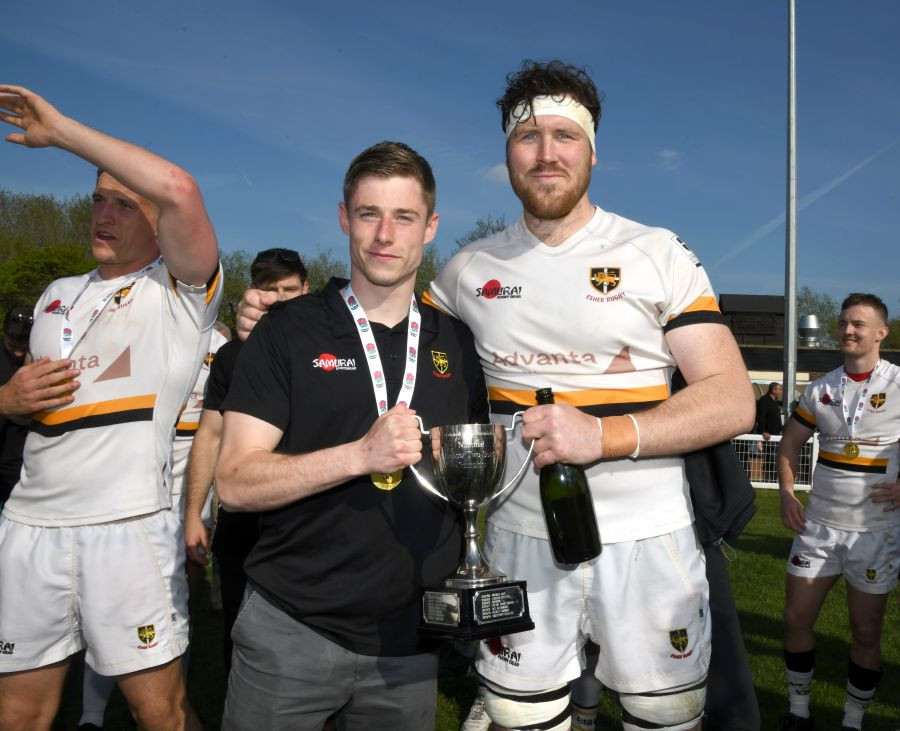 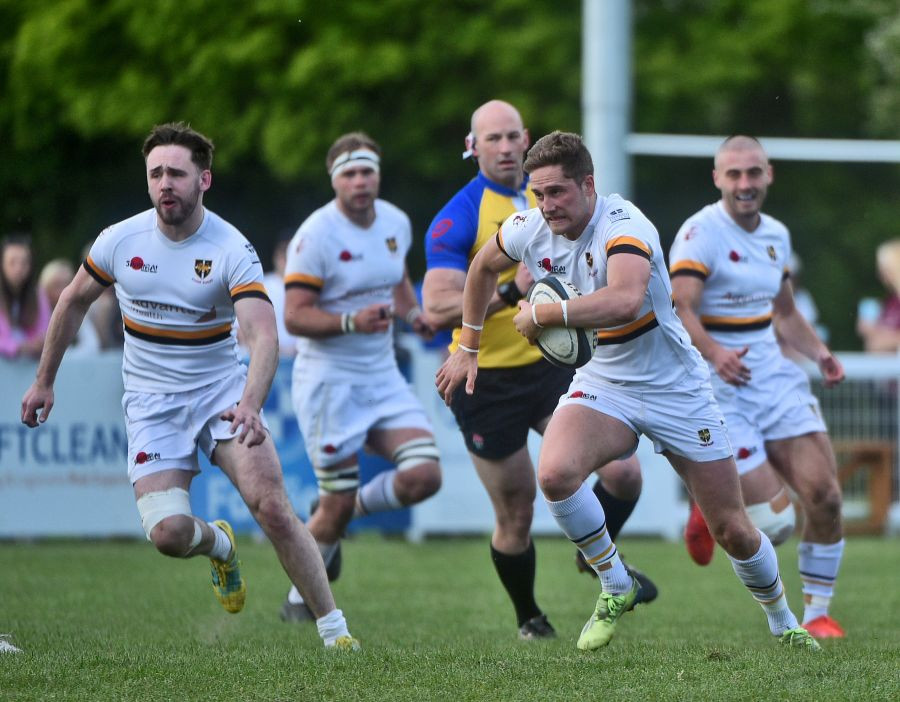 PETER WINTERBOTTOM has paid tribute to Esher's unsung heroes who helped drive Esher to their magnificent championship triumph and claim their first major honour for over a decade.

The Eees clinched the National Two South title on Saturday with an emphatic 55-24 victory at Rochford Hundred to claim a coveted place in National One next season.

Needing at least two points to seal the title, Esher effectively had the job done by half-time as they led 43-12 to sweep to a 10th successive league victory and take the title by eight points as their only challengers Redruth slipped up at Leicester Lions.

Director of Rugby Winterbottom, an England legend who won Grand Slams with the Red Rose and gained British Lions honours, said the achievement was "right up there" on a personal level but he was more pleased for the players and the fans who have followed the club through thick and thin.

And he was especially pleased for the players who have come up from the second and third teams and performed so magnificently as injuries threatened the Black and Ambers' promotion bid.

He said: "At the beginning of the season, we did feel we had a good enough squad to win it but we didn't realise how well the squad as a whole would perform when we had players out injured.

"For example, we had a midfield of Luke Peters and then Chris Davies came in and we finished the season with Miles Rawstron-Rudd and Fraser Donnelly in the centre and they have done extraordinarily well. I didn't realise how well the squad as a whole would play.

"We've had 45 players play first team this season and they have all done a hell of a good job. We've got some star players like (Sam) Morley and (Charlie) Gossington and those sort of guys but everybody else has contributed massively to our success.

"At the start of the season I felt we probably had 20-25 players who would be very good players but a lot of them got injured and it was the other guys who stepped in and did an equally good job.

"One example would be Tomek Pozniac. He played third team up until nearly Christmas, then he got a chance in the second team and got his first game against Redruth, scored two tries and he hasn't looked back. Players like him have been a revelation. It's great to see a guy coming through the third team and week in week out putting it in and getting his chance and taking it."

Before Winterbottom took over at Esher for his second stint in charge, many players felt that there was little room for advancement from the second and third teams even though they were performing well, and Esher's Director of Rugby was determined to change that.

He said: "We try and much as possible to select what we see. So, if you perform well, you get a chance, and it's having that honesty in selection that is important. We don't have any favourites. We care about what you do on the training pitch."

The title triumph was also a personal milestone for Head Coach Chris Wilkins, who also helped Esher to promotion as player under Winterbottom in 2000.

Winterbottom said: "It's been a whole team effort. I mean the coaching has been great; Wilko and Neil Hallett and all the other coaches have done a great job this season, but I think everybody has been pulling in the same direction and that has been key.

"Everybody has been enthusiastic; everybody has contributed in their own way, and it's been very refreshing that people have cared a lot about what the club has been doing."

Esher's title challenge looked to be slipping when they suffered back-to-back defeats against Henley and Hinckley in February but their superb victory over fellow title challengers Redruth on February 26 was the pivotal game of the campaign.

Winterbottom said: "We were a bit rocky, had a fairly dodgy start in January where we were winning games but not playing well and then we lost to Henley, which was very disappointing, and then at Hinckley, which was always going to be a difficult game.

"And I thought yes, it's going to be difficult to pick things up and get the fluency in our game which we needed. But it was an incredible performance when we beat Redruth at home because we took them apart.

"It was a fantastic turnaround and we never looked back. That performance gave the side the belief. The boys thought we can do this; we are a good side and I think we did develop into the best side in the league.

"We played some good rugby at times because after that we went to Clifton away and beat them comfortably and we never looked back. We didn't play well every game but when it really mattered, we performed. We've beaten the top three sides home and away.

"I felt there were times when the pressure of being at the top of the table was getting to the boys and perhaps one of the reasons why we had a bit of a blip. But suddenly then the pressure was off. The shackles were let loose and we started playing some decent rugby again."

Winterbottom admitted the progression of the club as a whole has proved he was right to step back into the coaching side after 15 years out of the game. He said: "On a personal level, it's been a hard few years really and for everything to have come to fruition has been fantastic. It's right up there.

"I had about 15 years when I wasn't involved in the game when I stopped coaching. I had nothing to do with rugby until I came back to Esher in 2019 so I had a good break. I think that enabled me to have the enthusiasm for the game that I had previously because I had been away for so long. I wouldn't say I really missed it but it's great to be involved and great to achieve something with a bunch of guys who all want to do well and be part of a successful club.

"But as far as we're all concerned this is just the start and we want to push on and keep the club moving forward. That is the aim and always has been, especially with myself and Wilko. We've always seen it as a real challenge and see where we can go."

Winterbottom received dozens of congratulatory messages, but one stood out, from Redruth coach Nigel Hambly. Winterbottom said: "He was very complimentary about Esher and said we were the best side in the league and deserved to go up. That was very magnanimous of him.

"It's also wonderful for people like John Inverdale, Ross Howard, Jerry Dance, Bob Stratton, the rest of the committee and staff who were all over the moon. But it is for everyone at the club, especially the players who have put the work in and the hours. They've had ups and downs this year but have managed to pull through. It has been a long tough season really. Obviously last season was cancelled but the boys were still training and putting in the work and I'm just very happy for them."

Winterbottom admitted the title triumph was more satisfying than his previous achievement in 2000. He added: "We won promotion in my first year in coaching at Esher in 2000, when Wilko was playing. But it was nothing like this season. This season has been tight, and it's been hard. There are some decent sides in Div Two.

"It was a great night back at the clubhouse., a long night. I don't know what time I got to bed. But people have got to savour it. It's an achievement and whatever the players do in the future, you never forget that you won the league."

More posts from author
Wednesday, 08 June 2022 Esher Rugby announce the sad loss of Mike Line and details for his funeral
Monday, 02 May 2022 Togetherness and teamwork bring success
Sunday, 01 May 2022 National 2 South Champions 2021/22
This website uses cookies. By continuing to browse the site, you are agreeing to our use of cookies.Read our Privacy Policy here.
Agree