U12s return from a fantastic tour in Devon 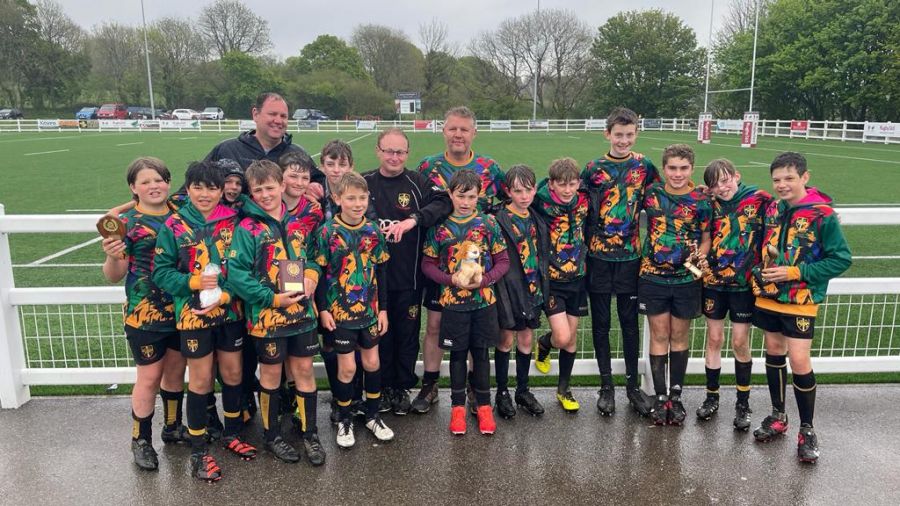 Rainclouds loomed as Esher faced off against Teddington, the opening game of the Big Devon Rugby Bash tour. Early Esher pressure saw Teddington Gold defending on the line, a hard-fought first half resulting in no points on the scoreboard and everything to play for.

Hard tackling on both sides left Adam Osment, team captain, injured and out of the tournament as the second half resumed. Teddington edged in a single try, all that separated a game that went end-to-end, closely fought to the final whistle.

With brightening skies, Barnet Elizabethans were quick off the mark, scoring in Esher's second game. Esher held their nerve and with widening play, the score was soon levelled, Sean Collins battling through to get the point. The glory was short-lived, with a kick chase resulting in another Barnet try.

Into the second half, Barnet put one more on the scoreboard with a huge try-line push, before a mid-pitch scramble left a Barnet player out cold, stretchered off the field. The game didn't resume, leaving the score at 3-1 to Barnet, who forfeit the game. Barnet took the points, but Esher took the scalps.

Meeting Teddington's second team, the Blues, the match opened with ferocious pace, rucking and counter rucking, releasing Harry Byde for a great wing run, before a scramble left a Teddington player down winded, and flashbacks to the Barnet game. The Blues resumed with pace, scoring twice, leaving Esher scrambling to regroup. Tough play in the centre of the pitch left Esher with two bloodied noses as the halftime whistle blew.

There was no let-up in pace for the second half, Teddington securing two more tries, Esher grinding up the centre of the pitch looking to get something on the scoreboard. Points escaped the Lions, the game ending in a 5-0 victory to Teddington.

Next up was tournament hosts, Ivybridge. Quick to put the ball over the line, the Esher team were left with heads down; a second for Ivybridge followed, a third and fourth soon after. The fifth felt inevitable as Esher scrabbled to get a grip on the game. The half-finished six to nothing and everything to fight for.

And fight Esher did against a bigger opposition - Devon knows how they make them so big - a ripped ball by Joseph Hollas opening the scoring for the Eees and a hint at the glory to come. The rain continued to dampen spirits, Esher fighting to the line again, only stopped by Ivybridge ripping the ball and moving the action back to the centre. The final whistle closed the game, a 6-1 defeat, but a second half that showed the strength and depth of Esher's fighting spirit.

Playing as an eight due to dwindling squad numbers for Westcombe, the final game loomed.

Hollas now had a taste for scoring, putting in the first try for Esher with an arcing run. A second followed, with great passing putting the ball back into the hands of Hollas, a spring in his step, a sparkle in his eye.

The second half resumed with a third for Hollas, repeating his multi-try form from the Surrey Waterfall competition the week before. And more points were to come. Following a heavy knock to Alex Bruce, he rallied only for Westcombe to pass him the ball, leaving him to run it down the length of the pitch for the fourth try of the match.

A great counter ruck from Westcombe gave the opponents a conciliatory point in a dominant Esher performance. With the game concluded, Hollas paused to say that it felt "good". A man of few words, but many tries.

The Big Devon Rugby Bash saw the Esher U12s team head to a dark place and crawl back to the light. Individuals shone, but it was the heart of the lion that shone through.