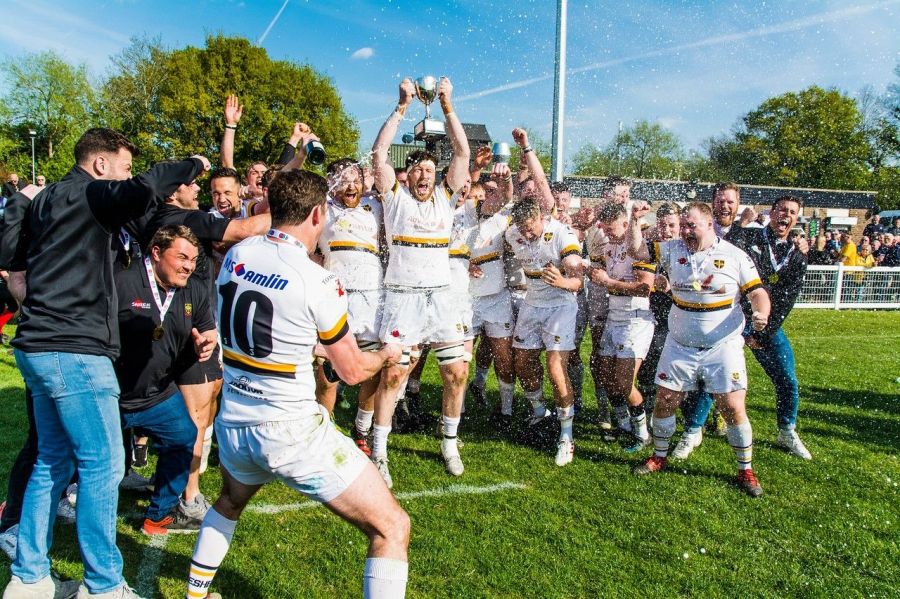 After a thrilling season, Esher's victory on the final weekend at Rochford Hundred secured promotion to National Division One.

In a hugely competitive league, home and away victories over our three main title rivals, Redruth, Clifton and Worthing, proved decisive in a rollercoaster campaign which saw Esher always in contention. However, following an away defeat at Hinckley in February, Peter Winterbottom's side appeared destined to fall agonisingly short of the ultimate goal, until a brilliant run of form, including wins over those other challengers, eventually saw Esher home by an 8 point margin.

This year really has been a team effort - on and off the pitch. To have nearly 1500 people at our last home fixture - to take coach loads of supporters to away matches - to see the genuine togetherness of the entire first team squad of 40 players at the final whistle at Rochford, was a huge credit to everyone who's helped create a united club this season.

Huge thanks go to all the staff at the club, to an outstanding coaching set-up, but of course primarily to the players, who've played such a thrilling brand of rugby. To Charlie Gossington, Tom James and Jack Lavin - all retiring too young - we owe you a huge debt of gratitude. To Adam Bullett - a genuine leader by example and an outstanding decision-maker on the field. To Sam Morley for lots of things but primarily the last ditch conversion against Hinckley back in the autumn from the touch line, without which the whole season might have tailed off. To Dan Rowland for THAT try against Worthing in the 83rd minute.

It's been a great year to be part of the club, at every level. It gets harder from here, but let's hope it's creating a momentum we can build on in the coming seasons.

More posts from author
Wednesday, 08 June 2022 Esher Rugby announce the sad loss of Mike Line and details for his funeral
Monday, 02 May 2022 Wints pays tribute to teamwork
Sunday, 01 May 2022 National 2 South Champions 2021/22
This website uses cookies. By continuing to browse the site, you are agreeing to our use of cookies.Read our Privacy Policy here.
Agree