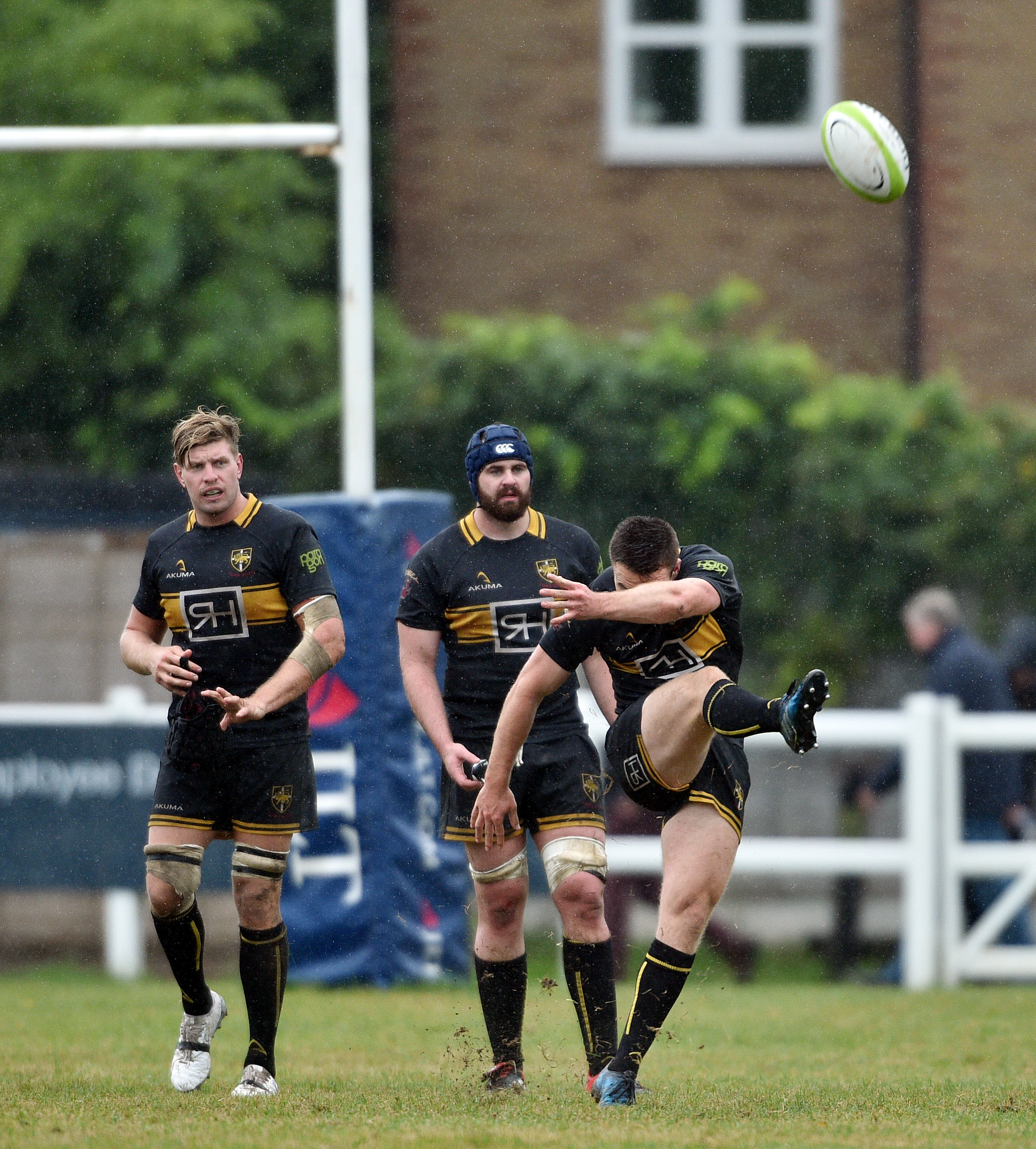 Esher got back to winning ways again on Saturday, producing a stirring performance to beat Rosslyn Park 25-17 in a fiercely contested local derby at The Rock in south-west London.

With the two sides separated by 10 league places at the start of the day, it was the away team who made the brighter start, hitting the crossbar with a Paul Roberts penalty in the 5th minute before opening the scoring 9 minutes later through a try from Joe Beckett.Receiving the ball in the middle of the field, wing Kariym Irving raced through a gap in the centres and straightened his line, driving forwards as he ploughed into the home defence.Irving was eventually brought to ground, but having tied in several men the ball was recycled quickly for Tom James to put Beckett away in the left-hand corner.The conversion was unsuccessful, leaving Esher with a 5 point lead after 14 minutes.

The away side extended their lead with a Paul Roberts penalty in the 23rd minute, before Park began to gain a foothold in the game and almost scored 4 minutes later through a break from centre Peter Weightman.Cutting through the Esherdefence, the Park man raced towards the line and looked certain to score until Kariym Irving came steaming across from his wing with a crunching tackle from around 5 yards out.The Esherdefence managed to realign from that point and the danger was averted.

Park continued to press however, building momentum as they enjoyed a lengthy spell of possession in the Esher 22, but they were kept at bay by some aggressive defending from the away side before eventually knocking the ball on.Having been forced to defend for the last few minutes, Esher went on to finish the half strongly, increasing their lead through another Paul Roberts penalty in the 39th minute and then earning another penalty with the final play of the period.Basil Strang stepped up to take the long range kick from the half-way line, but his effort went wide to leave the half-time score at Rosslyn Park 0-Esher 11.

The second half started in relatively low key fashion with neither side able to carve out any clear-cut opportunities, but it was Park who drew first blood through a Greg Lound penalty to reduce Esher's lead to 8 points in the 50th minute.

Esher responded well to the setback, with a break down the left-hand touchline from Basil Strang finding hooker Brad Clements in support in the Park 22.Clements was tackled just inside the line, but the ball was quickly shipped back infield where the Esher forwards pounded away at the Park try line until No. 8 Harrison Collins burst through to score beside the posts.Roberts added the conversion to give Esher an 18-3 lead with 24 minutes left to play.

Park worked their way back into Esher's half after the restart, but as the away side looked to relieve the pressure with a clearance kick, former Esher wing Charlie Amesbury gathered the high ball and made a scything break through the defence, weaving in and out before spilling the ball in the tackle just short of the line.The break from Amesbury proved to be the cue for another spell of possession from the hosts though, spreading the ball wide at every opportunity as they piled forwards in a bid to outflank Esher's sliding defence and turn the game around.

The home side continued to enjoy possession and territory as the game entered the final 10 minutes, eventually breaking Esher's resistance with a close range score from second row Adam Frampton.Greg Lound added the conversion to make the scoreline Rosslyn Park 10-Esher 18 after 75 minutes.

Recent Esher fixtures have probably needed to carry a health warning for their supporters, but any fears of another nail biting finish were soon allayed as the away side fought back to score their third try of the afternoon just 2 minutes later.Winning a penalty from the restart, the Esher forwards gathered the ball from the resulting lineout before marching their opponents back towards their own line with a powerful driving maul from outside the 22.The maul was eventually brought to a halt, but the ball was spun back to Kariym Irving who promptly blasted his way through the defence to cap a fine individual performance and score under the posts.Owen Waters added the conversion to restore Esher's lead to 15 points with 3 minutes left on the clock.

Park came back again and battered their way over for a second converted try from Adam Frampton with the final play of the match, but the day belonged to Esher as they bounced back from the pain of recent defeats with a hard earned and well deserved victory.