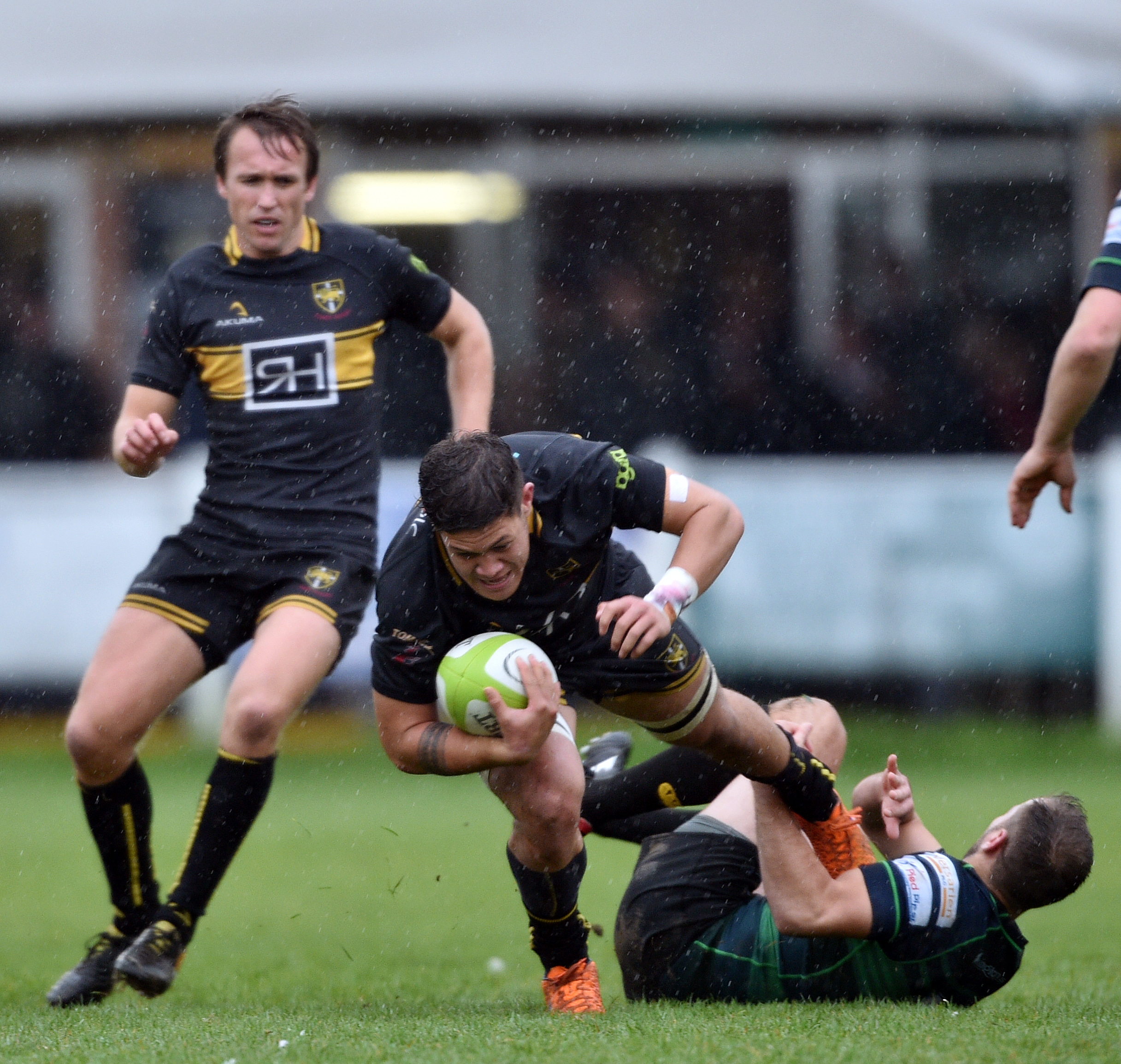 Sale FC hosted Esher at the CorpAcq stadium on a gloomy Saturday afternoon.

The visitors were soon on the score sheet with a penalty kick slotted home by Esher fly half Paul Roberts on 3 minutes.

Sale responded quickly with a try in the corner from winger Paulo Odogwu, capitalising on a strong run from Elliot Hodgson and slick handling by Billy Wara. Matt Bradley narrowly missed the conversion attempt.

Within a minute, Esher regained the advantage when an ambitious pass from centre Jack Moorhouse was intercepted by fly half Roberts who ran clear from halfway to score under the posts. Roberts added the extra points to extend the Esher lead taking the score to Sale 5 Esher 10.

On 15 minutes a well organised Esher line-out and forward drive , initially well held up by the Sale defence, concluded with a try by Esher centre Waters, Roberts converting from a tight angle extending the lead to 12 points.

With the passage of play evenly balanced, Sale once again contrived to give Esher the advantage when , having been judged to have conceded a scrum for a knock on , the referee upgraded the decision to a penalty kick following dissent by Dave Seymour. The result kick by Roberts took Esher deep into the Sale 22 metre area, from the Esher line out, the visitors kept control until finally drawing a penalty which also resulted in a Yellow Card for Sale back row forward Tom Ailes.

Roberts was successful with the penalty kick to extend the Esher lead and with Sales 14 men showing determination in defence, Esher were unable to take advantage of their numerical superiority. Half Time score Sale FC 12 Esher 27

Within seconds of the restart, Sale, still with a player in the sin bin, spread the ball wide creating another interception opportunity for Esher, just inside the Sale half, which substitute Beckett duly accepted to score under the posts.

5 minutes later , Sale lost possession in the line-out on their own throw , from which Sale recovered possession , only for a forward pass to hand the advantage back to Esher.

From the resulting scrum, a skilful chip landing behind the Sale defence provided the Esher winger Tom James a simple chance to score.

The ever reliable Roberts again converting to take the score to: Sale FC 12 Esher 41 on 45 minutes.

At this point Neil Briggs took the field, Sale camped inside the Esher 22 and proceeded to control the play, taking good line-out ball and driving at the Esher line. During this passage of play Esher substitute Berry was sin binned and from the penalty on 51 minutes, Sale won the resulting line-out and drove over the try line Neil Briggs scoring in the corner.

Bradley missed a difficult opportunity to add the extra points.

Sale conceded a penalty shortly after the restart when attempting to breakout from their 22, the referee awarded a penalty for "crossing". Roberts again adding the 3 points for Esher.

As the match entered the last quarter , Sale conceded a penalty within kicking distance , Roberts seemed to take some time to set up for the kick , and received suitable encouragement from the home crowd to get on with it! Roberts duly missed, the score remaining on Sale FC 17 Esher 44.

Still 27 points in arrears, Sale continued to take the game to the visitors, a Yellow Card, for Esher full back Simpson.

From the penalty and successful line-out and rolling maul, substitute Dan Birchall drove over to score, successfully converted by Bradley

With Sale very much in the ascendency another yellow card was shown to Esher hooker Hope maintaining Sales numerical advantage.

Still pressing inside the Esher 22, Sale scored another try through Tom Ailes, this time from a scrum, driving through the Esher pack, Bradley adding the extra 2 points.