Sub-zero temperatures and a train strike offered little encouragement to supporters from either side to step outdoors but those who ventured to The Rock on Friday night were entertained by a high-scoring encounter on the artificial pitch.

It was so cold that ice settled on the drinks of spectators but both teams found the best possible way to avoid hypothermia was a fast-moving clash.

Park, who won 32-27 when the sides met in September, were ahead within two minutes, a well-honed move from a lineout allowing scrum-half Seb Strang to dive in under the posts and Craig Holland converting.

They almost repeated the trick soon after but instead went ahead through a Morley penalty for a scrummage offence.

Park were back in front on 16 minutes, winning possession in Esher territory and driving on to create space out wide for Benji Marfo to cross, the conversion attempt floating wide.

Determined defending prevented Marfo striking again within minutes while a knock-on, with the hosts poised on the line following a driving maul brought another let-off.

Having seen off a sustained spell of pressure, Es were rewarded by a second try on 34 minutes, a midfield interception wing Ben Fitzgerald to cross, Morley's extras sending his side 17-12 in front.

Hopes of staying ahead at the break were briefly dashed, though, centre Matt Gordon's consummate cross-field kick setting up Joe Luca-Smith for the try before Holland converted.

Yet Es nosed in front once more, pouncing on a loss of concentration with a charge-down to score straight from the restart through flanker Ollie Norris's unconverted effort to be 22-19 up.

Within three minutes of the teams returning, Park were ahead again, an Esher clearance failing to do its job so that Luca Smith was set up for a try on the left, Holland's kick missing to that his side remained just two points in front. Morley responded through a penalty to nick a single point advantage.

The visitors were now pushing hard and enjoyed the balance of play only for lock Lorcan Dow to be despatched to the sinbin on 55 minutes. Within 60 seconds he saw his side concede, a driving maul allowed Charlie Piper to touch down and Holland completing a tricky conversion for 31-25. The damage became greater when a pick-and-go move sent over Harry Ledger, Holland extending the advantage to 13 points.

Being back to full strength was unable to save Es from conceding again on 72, substitute second row Harry Spencer producing a fine dummy and cantering over from around 40 metres, Luc Smith converting this time at 45-25.

Every point is valuable to Esher in their fight to evade relegation, so centre Rowland's score on 76 may yet prove invaluable. Luc Smith gave Park the final word by adding a penalty before the final whistle signalled time to warm up.

It was Esher's 11th defeat from 14 outings of a difficult first half of the campaign, the early stages of their return to Division One being badly hampered by a severe injury crisis.

When they return to action on Saturday January 7 it will be to host Birmingham Moseley – 35-24 victors when the sides met in the midlands in September – knowing they may need to win around half of their remaining dozen matches. 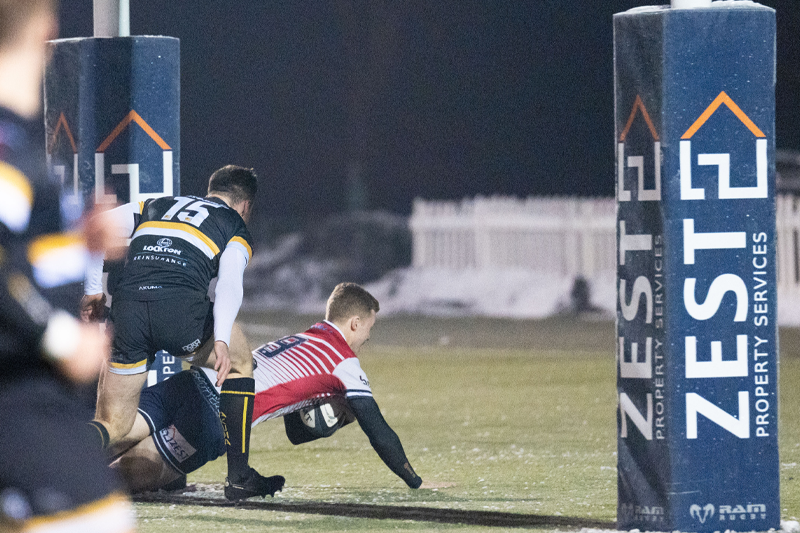