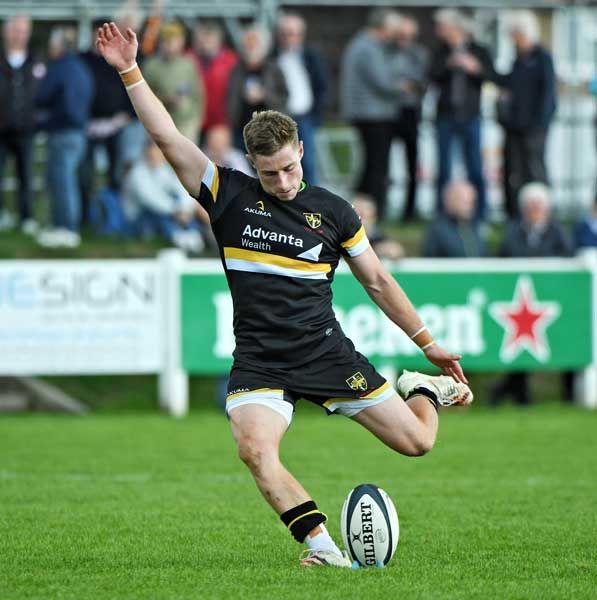 Victory over the only side below them – keeping a clean sheet – made it the most rewarding day of Esher's tough campaign so far.

They had broken their duck two weeks earlier at Chinnor but there was no doubt Saturday's clash at Molesey Road fell into the "must-win "category.

Nearing the halfway mark of the season, nine defeats on promotion to National Division One have now been partially offset by two successes, taking Es to within a point of escaping the relegation zone. But it's probably going to take another half-dozen wins at least to ensure they do not plunge back to Division Two South.

Hull's fortunes, having claimed the northern title by four points last season, have underlined the difference in standard while an injury list longer than airport queues at Christmas added all sorts of complications for Esher director of rugby Peter Winterbottom and his backroom team.

That has now abated and they are starting to show the flow and confidence which marked their run to promotion.

Not that it was obvious in the opening stages, the ball proving elusive for the hosts. When the breakthrough came, on 19 minutes, it sparked a spurt of three tries which would put Es firmly in charge.

A rolling maul saw the ball fed out, centre Myles Rawstron-Rudd cutting through a line of challenges before feeding flanker Harvey Scott for a try to the left of the posts, Sam Morley's conversion making it 7-0.

That gave the hosts a huge boost and on the half-hour influential outside centre Jack Walsh produced a spurt of speed in midfield before finding wing Harri Lang. He destined for the line but instead was intercepted by corner flag by Reece Dean's superb covering challenge. But from the resulting lineout, scrum-half Pierre Thompson underlined an influential display by zipping over, Morley adding a second conversion.

Before the visitors had time to find their feet they were even further adrift, Andy Hamilton showing impressive speed for a hooker to latch on to an offload near the centre line and storm through. Morley's conversion was soon followed by a penalty and Esher were 24-0 up at the break, making it one of the happier midway intervals enjoyed by their supporters in the past three months.

With the wind against them, Es looked for a fourth try to settle the match but had to wait for the 63rd minute before it arrived – bringing with it a bonus point – courtesy of a move which any coach would purr about. Joe Vajner, having replaced Hamilton, took a short lineout on the right and the return pass enabled him to cross the line untroubled.

Morley maintained his 100% record by adding the extras and then another penalty 10 minutes later, Winterbottom describing his team's clean sheet as "a real achievement", not least as they had to defend strongly in the final stages as Hull sought a consolation before the long journey home.

It proved an especially pleasing day for Esher prop Matt Lowes, celebrating his 100th appearance for the club, while skipper Adam Bullett marked his 50th outing.

So often outmuscled up front this season, they will doubtless benefit from the presence of new signing Jack Owlett. The former Scotland U20 prop, who can play at both loosehead and tighthead, was a victim of the collapse of Premiership side Worcester Warriors. Having crossed paths with half-back pair Morley and Thompson at Exeter, he joined Wasps in 2019 before departing to Worcester, making two appearances at elite level before the club's abrupt departure.

Esher head to Bishop's Stortford on Saturday, hoping to overcome the sixth-placed side but expecting a much tougher challenge.