Thank you to all those who made it to Molesey Road on Saturday to cheer on Esher 1st XV to yet another victory. They played Guernsey Raiders for the first time in this league making it 12 out of 12 wins for Esher, final result 27-24 and top of the National 2 South League Table 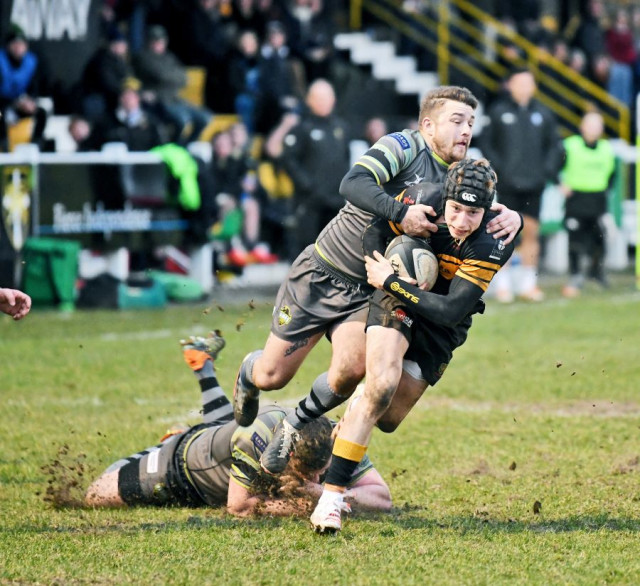 Match Report by Steph Franklin
Two penalty tries helped Esher fend off a second-half fight back from a feisty Guernsey Raiders side to top the table in a tense encounter at Molesey Road.

The home side started strong with a promising looking break mere minutes after kickoff, though a forward pass stopped them in their tracks. Esher were still first to make it onto the scoreboard thanks to a Sam Morley penalty in the seventh minute. The hosts went straight on the attack again from the restart, camping out on the Guernsey line before being rewarded for their efforts with a penalty try.

Guernsey's Anthony Armstrong was next to score, leaving the Esher defence in his wake as a brilliant interception sent him flying over from near halfway, though the conversion missed its mark.

Esher widened their lead thanks to Morley, first through a penalty and then through a well executed try, spotting a gap in the visitors' defence and nipping across the line before converting his own score.

The visitors came out fighting in the second half, with two more tries from Armstrong and one from Callum Roberts, two of which were successfully converted by Charlie Davies, handing the lead to the Raiders as the pressure increased on both teams.

A second penalty try for the home side placed them back in the lead as the game entered its final ten minutes. Both sides continued fighting until the final whistle, but neither managed to score again as the game drew to a close.

Have you booked your place yet? Ladies Charity Pr...
February Half Term Multi Sports Camp