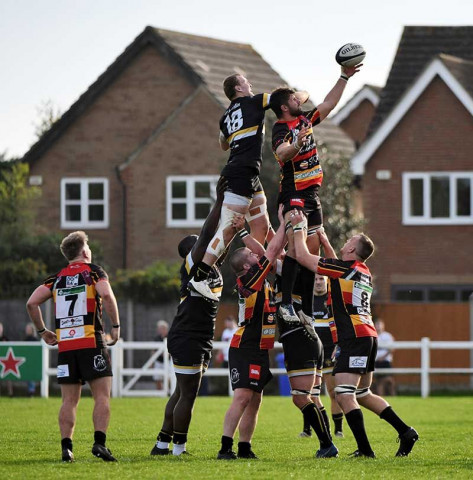 All images thanks to Leo Wilkinson Photography

Esher's run of disappointing form this season continues, as a strong second half performance from Cinderford kept the Eees away from a much-needed home win.

Esher started strong with a series of attacks on the Cinderford line, the last of which ended in a yellow card for Cinderford, and a successful penalty kick from Sam Morley put the hosts in the lead from the start. A try for Esher's Myles Rawstron-Rudd followed in the eighteenth minute, as an impressive sidestep sent him racing under the posts, with Morley converting to extend the home side's lead.

Cinderford hit straight back from the restart, however, with Mike Austin making the break and scoring under the posts, leaving himself a straightforward job to convert his own try.

Esher's Sam Bullock was next to score; with the forwards working through a number of pick-and-go phases, he spotted a gap in the pile of bodies and reached through to score under the posts, with Morley once again making light work of the conversion.

Although at this point it seemed Esher were on the ascendency, Cinderford refused to sit back, with two more tries before half time - from Joe Mullis and Will Hendy, both converted by Austin - giving them a four point lead as they went into the break.

The second half opened in the same way as the first, with Morley kicking another successful penalty for the home side, and another yellow card for the visitors; though this time the resulting penalty kick was wide of its mark. This second yellow for Cinderford seemed to kick their attack into gear as they mounted an all-out attack on the Esher line.

Although both sides continued to work hard, neither side managed another score until ten minutes later, when a Cinderford lineout led them to drive over for their bonus point try from Nathan Taylor, with the Esher pack no match for the visitors' strength. Austin once again converted to extend the Cinderford lead. They repeated this move a few minutes later, with another catch-and-drive this time giving Tyler Jerrum the opportunity to score, with Austin again adding the extras.

Cinderford's flurry of tries continued, as they scored again mere moments later, this time through George Boulton who made a brilliant break from halfway to score under the posts, leaving Austin another straightforward job for his final conversion of the game.

With almost twenty minutes of the game remaining, Esher continued to attack the Cinderford line, with Afolabi Fasogbon crashing through in the corner to score the hosts' third of the afternoon, though this time the conversion missed its mark. Despite their best efforts, however, they were unable to score again, leaving Cinderford to travel home with the victory.

More posts from author
Monday, 07 November 2022 Are you ready for the 2022 Autumn Nations Series?
Wednesday, 02 November 2022 10th November Event at Effingham Golf Club
Friday, 28 October 2022 Cardinals v Maidenhead 2s Saturday
This website uses cookies. By continuing to browse the site, you are agreeing to our use of cookies.Read our Privacy Policy here.
Agree