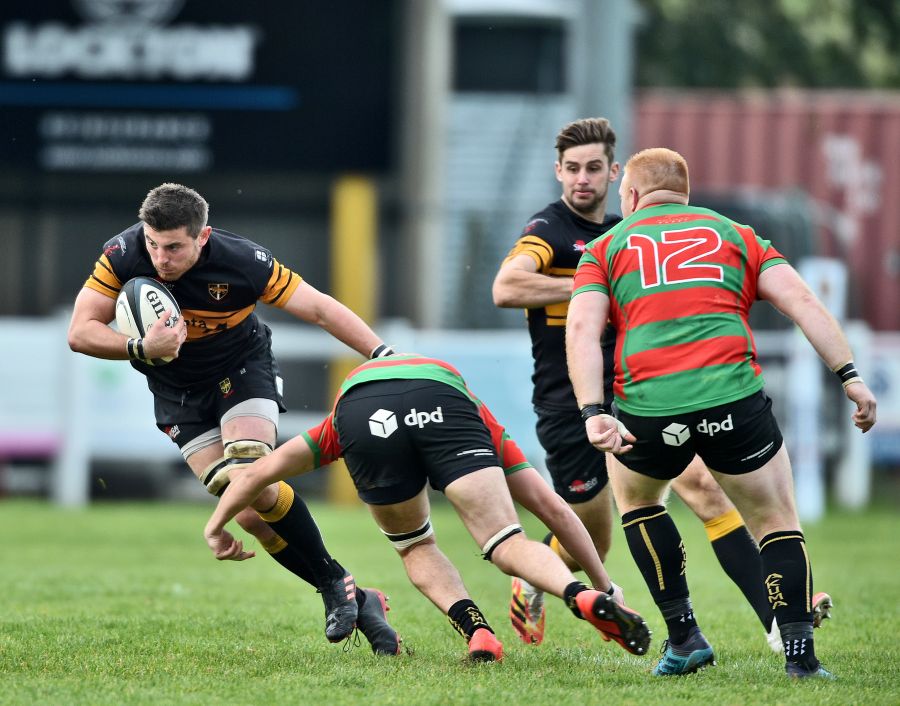 The match in pictures:  https://www.leothephotographer.co.uk/p/36233hfc

The EEEs snatched a last-gasp victory at Molesey Road despite being a man down, in a tense and thrilling encounter which saw the lead change hands no less than seven times during the course of the match.

Keen to return to winning ways after last week's defeat at Henley and drawing against Barnes at home, we had a point to prove going into the game, but Hinckley weren't about to make things easy for us.

Both sides were raring to go from the off, with the visitors' dominant display in the first five minutes giving them a first try courtesy of inside centre Adam Nunney, with winger Joe Wilson securing his first of four successful conversions during the afternoon.

The EEEs were undeterred, however, and struck back two minutes later, thanks to an interception from Jack Lavin, duly converted by Sam Morley. An impressive break a few minutes later from Luke Peters and Daniel Rowland looked promising, but it took a few more tricky phases before Charlie Gossington broke free, flicking the ball wide into the waiting hands of winger Harri Lang who darted over for our second of the afternoon, though the conversion was wide of its mark.

After an Esher penalty, two more Hinckley tries courtesy of Luke Coltman handed the lead back to the visitors. Undeterred, however, Esher mounted another attack on the Hinckley line, this time thanks to a magnificent collective effort from the backs on the stroke of half time, with Morley once again making the kick look easy, and leaving us 22-19 up at the break.

The second half was no less gripping, as a Hinckley lineout and the resulting maul took them close to taking the lead once again, but a penalty handed possession back to Esher. It didn't stay that way for long, however, as a loose pass gave Hinckley's winger Joe Wilson the opportunity for an interception, outpacing the Esher defence and crossing the whitewash, before converting his own try. The hosts hit back from the restart, with Harri Lang pulling the lead back from Hinckley and securing our try bonus point in the process.

A number of scrum penalties, leading to a yellow card for Matthew Lowes in the 71st minute left the men in black and amber with fourteen men for the final minutes of the game. Hinckley made the most of their man advantage moments later, with Rory Vowles' impressive score in the corner, and Wilson's subsequent conversion, apparently sealing the victory for the visitors with less than five minutes left on the clock.

The EEEs, however, refused to roll over and launched a final attacking campaign on Hinckley's line. It was Tom James who finally managed to edge us over the line, leaving us a mere one point short before the conversion. You could have heard a pin drop at Molesey Road as Morley lined up his crucial kick which, thankfully, was right on target as the fans erupted in the stands.