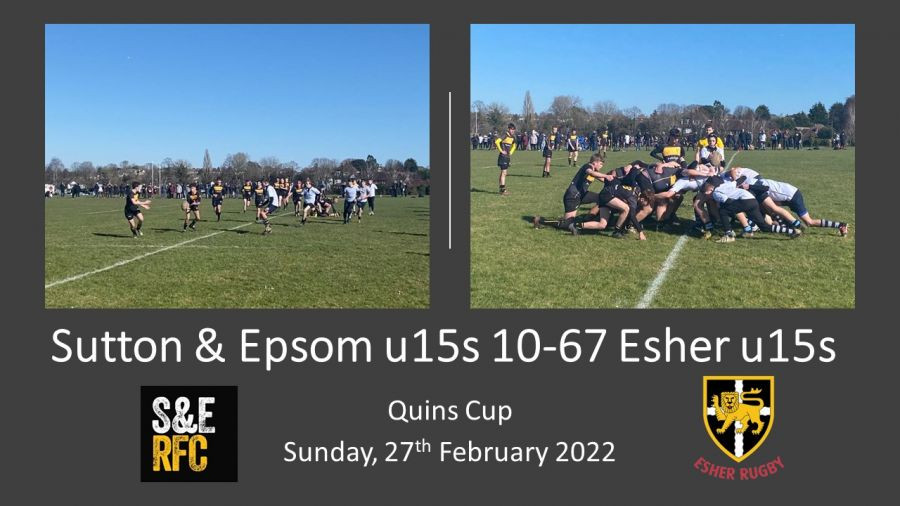 Esher's build up this match was hampered by absentees and injuries to Connor, Jack, Noah & Daniel B. The E's had a bare bones squad with several players out of position and the coaches had challenged the boys to put in 100% and trust their skills, they did not disappoint.

Tom was quick out of the blocks to break through and gallop up the hill to give the visitors the lead. A tricky first kick into the wind from Charlie slid just wide. Esher's worked their way up the pitch. A clever snipe from the ruck by Jamie doubled the score and Charlie added the two points.

The hosts were struggling to deal with Esher's combination of pods with Ben, Ashley, Shakur & Tom all making yards with every carry and wide play with Kai, Josh D and Henry H. linking up nicely.

The E's soon fashioned an opening for Tom to run in his second try. S&E's few trips into the Esher half were snuffed out by a combination of tackles, rucks & forcing errors. Henry C. equipped himself well under the high ball in an unfamiliar full back position.

Shakur scored a fourth try proving to be unstoppable from two yards out and Tom ran in another for a well-deserved 1st half hat-trick.

Sutton & Epsom never gave up though and good work down their right wing followed by some quick ball recycling through their forwards allowed them to score.

Second half Esher were downhill, down wind and really starting to play nice rugby. Excellent work in the ruck from Ozzy turned a seemingly lost ball into attack and Tom managed to reach out to score after taking several defenders with him. Robin, Josh B. & Daniel M. were also outstanding in the ruck.

Callum scored with his first touch following a mammoth run and offload from Josh D. Esher now began to utilise the space and once the ball reached Harry on the wing, he was uncatchable and ran round to score under the posts

Undeterred, S&E kept going and were able to score a fine try in the corner, but any celebration was short lived when Harry, with a bit more to do this time, still demonstrated his incredible pace to run in his second try. The resulting kick-off fell to Callum who exploited gaps in their defence to run a 10th try straight back. Tom added a fifth try to his impressive personal haul and Charlie, who converted 7 from 11 had the last kick of the game.

To their credit, Sutton & Epsom never stopped trying and remained positive throughout, still chasing down E's ball carriers to the final whistle. But they were on the end of a disciplined and mature shift from every single Esher player.