“I don’t remember much about my England debut. I got knocked out and even missed Erika Roe’s famous streak at Twickenham” 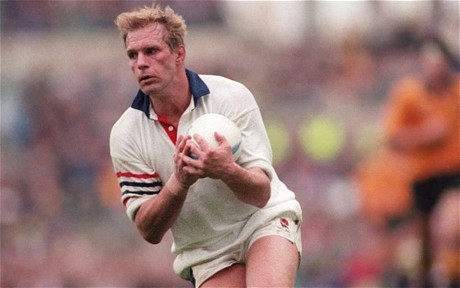 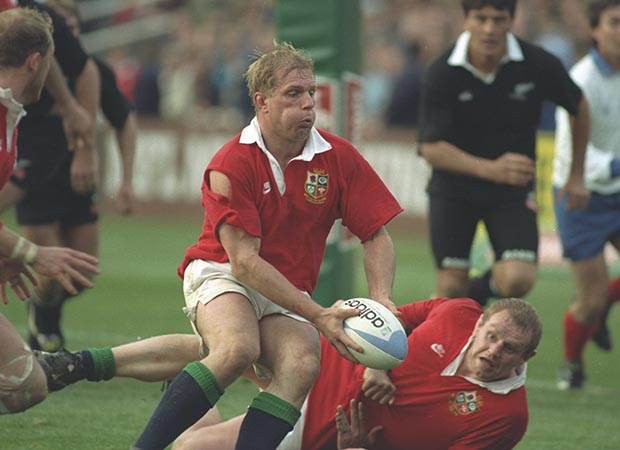 THE blond mop of hair that earned him the nickname the 'Strawman' may have faded and thinned over the years, but there is no mistaking the powerful frame often seen prowling the touchlines at Esher Rugby Club.

In an age where the epithet legend is used with abandon to describe any half-decent England international, those lucky enough to see Peter James Winterbottom in his pomp are in no doubt that the hard-as-granite former Harlequins flanker is in that bracket.

At a time when England internationals were limited to the Five Nations and a sprinkling of other Tests, 'Winters' won 58 caps, was England's most-capped openside until Neil Back in 2003 and the only the second player to reach the 50-cap milestone after flying winger Rory Underwood

Winters went on to earn seven Lions caps on two tours to New Zealand and his displays in two series defeats earned him the respect and admiration of the All Blacks. He tackled with unflinching ferocity and in 1983 New Zealand voted him one of the five players of the year. No small feat.

His rugby career was to take him from Headingley and Harlequins in this country, to Hawkes Bay in New Zealand and Transvaal in South Africa, before taking up a coaching role with Quins.

But the advent of professionalism in 1996-7 meant he could not marry that with his career in finance in the city but he was to resume coaching with Esher, becoming head coach for four years and taking them into National One in 2007.

Here, he looks back fondly on those days at Esher, where he is a regular visitor, and recalls those heady days with England, where he won two Grand Slams and went so close to claiming World Cup glory in 1991.

Yet his England debut on January 2 1982 against Australia will always be remembered for other reasons than a 15-11 victory as it was the day streaker Erika Roe stripped off to bare her sizeable charms to Twickenham and stole the headlines.

But that incident went unnoticed by Winters and he admits he has little recollection of the match. He explained: "I got knocked out when I tried to tackle Brendan Moon. I always thought I had tackled him but then I watched it on the video and I didn't!

"His knee hit the top of my head and I was staggering around for a few minutes. I played on, there was no HIA then. I thought nothing of it. You feel a bit wobbly a bit light-headed and then crack on.

"But I didn't actually see Erika Roe. Here was a helluva hullaballoo at half-time but I was looking at the North End where there was a bloke in a gorilla suit who ran on to the pitch. I was watching him - obviously I should have been watching the South End!

"By the time it had all happened, it was too late, and I was so busy trying to concentrate on what I was doing, listening to Billy's (Beaumont) half-time speech, I sort of missed it all, it was a shame. 60,000 people saw her and I was the only one that didn't!"

Winterbottom was soon to establish himself as an England regular, but it was to be many years before the team achieved memorable successes. The inaugural World Cup in 1987 was little short of a disaster but by the end of that decade they had evolved into a formidable side and Grand Slam triumphs in 1991 and 1992 were tangible reward while they went so close to World Cup glory on home soil in 1991.

Winters said: "My personal highlights were without doubt the first Grand Slam in 91. Grand Slams are not easy to come by, certainly not in those days. We hadn't had a Grand Slam since Billy's (Beaumont) in 1980, so that was a highlight. The other highlight of course was getting to the World Cup final."

England were to lose 12-6 to Australia on that day and some fans and players feel that it was a huge chance missed as they believe switching from their forward-orientated game that day to a more expansive game played into Wallaby hands.

But Winters has a different take on it. He said: "That was all sort of agreed between the coaches and the players. We just did not think we would dominate the Australian pack the way we had others. They had a good pack.

"As it turned out we won so much ball, I don't know what the stats were, but we were churning it out. We had our chances in the game. Whether we would have done better had we not played so expansively, I don't know.

"I know quite a few of the players are still upset that we played the way we did but, on the day, we had our chances. Australia scored a try from an English mistake in the Australian 22, kicked it down the pitch, got a lineout and scored from that.

"It could all have been so different- David Campese's knock-on when Rory Underwood would probably have scored. That's another incident. It was all disappointing and it would have been great to have won the World Cup that day, but we didn't and you have to live with that.

"I think from a playing point of view we'd been so disappointing in the 1987 World Cup, it was nice that a lot of those players who played in 87 were the backbone of the 91 side.

"We let ourselves down in 87 and Geoff Cook was brought in with Roger Uttley as coach. The nice part was that people like myself, Wade Dooley, Mike Teague, Dean Richards and Brian Moore became a competitive side and managed to turn it around with the help of the likes of Will Carling and Jerry Guscott, who were the icing on the cake of course."

But Winters believes that the current England side under Eddie Jones face a huge task to become World Cup contenders again in Japan next year. He said: "I feel sorry for the England team at the moment.

"They are in a position where they haven't had much success in the past few months and I think they're going to find it very difficult to turn it around. We seem to have lost the ability to win the close games and to show character and dig in when it's necessary.

"I don't think we've progressed. Eddie had a nice purple patch early doors, a honeymoon period, but has found it very difficult to progress the side and expand on what they've got.

"Now it's a confidence thing. I'm sure some players are pointing the finger at some of the others and looking for people to blame. To change that now and get the side performing to the potential they've got is going to be very difficult. We've got to have a very good November series and be competitive and be in the mix to be winning the (Six Nations) Championship.

"You can lose the odd game but you've got to be competitive. Without a doubt we've gone backwards, and I don't agree with quite a few of Eddie's selections. First off, I would not have Hartley as hooker or captain.

"I think here are better hookers in the country and is his leadership that much better than someday else's? I haven't seen that.

"I don't think the 10-12 combination is right with Ford and Farrell, they've had their moments, but I don't think its clicked. I'm not sure that Cipriani-Farrell is the right combination either because I'm not sure if they get on with each other and that's important. Your option then is to move Farrell to 10 and bring in Teo or Tuilagi if he's fit.

"There are plenty of other places where I'd disagree, and the World Cup is coming up fasts. We've got the All Blacks in November and we need a big, big performance and from then take it into the Six Nations because you've got to build some momentum and be playing with spirit and enthusiasm. We've got to go and take on the All Blacks and move and move the ball around."

But Winters does see room for optimism in the shape of Tom Curry at No7, who he believes has the potential to become a standout player in England's problem position that has not been adequately filled since the retirement of Neil Back.

He said: "This boy Tom Curry is potentially the man. He has got everything about his game and openside needs.

"He has a high work-rate, he's very physical, has got good hands, all-round he's a very good player. But it's about getting combinations that can pay with him.

"Billy Vunipola is clearly the out and out candidate for No 8 alongside Curry. It's about who complements them at six."

Winters, now 58, tries to get down to Molesey Road a handful of times each season and admits he enjoys watching Esher's brand of rugby

He coached the first team for several years and looks back fondly on those days. He recalled: "I'd been coaching at Quins for a couple of years but when they went professional and into day-time training and I'd been working in the city, so I decided to stop.

"But a couple of years later I fancied getting back into coaching and Hugh McHardy was running the rugby at Esher at the time and asked if I fancied having a crack coaching the first team, so I did.

"I did that for about four years and we had quite a bit of success because we had quite a few decent players like Jan Bonney. Then Harvey Thorneycroft and Spencer Bromley came along and we did well and got promoted to National One."

But while promotion was the highlight on the pitch at Esher for Winters, he admits it was the camaraderie at the club that was the real draw.

He said: "I remember Hugh McHardy's ability to galvanise the side with some team building experiences.

"One incident that springs to mind was when we were coming back on the train from a game down in Penzance and all the lads are hungover and desperately hungry.

"Well, Hugh phoned up and had pizzas delivered on the platform at Bristol or Exeter or wherever. From being famished and tired, it was a masterstroke. That sort of thing was Hughie's forte.

"The other thing was when the clubhouse was built we had to change in a marquee for the whole season. It rained constantly for the whole winter. It was a desperate time and I think it was when Harvey Thorneycroft had just joined so he went from a professional club in Northampton to changing in a marquee. We couldn't even use our pitch and had to play our home games at Met Police.

"I enjoyed the club, I enjoyed the people and that's why I did it for a few years. I stopped when my little girl was born because something had to give.

"I still try and get down there three or four times a season because it's my local club and they play a pretty good standard and entertaining rugby so it's nice to go down there and have a pint and watch some decent players."