​During the month of November the Esher Walking Rugby Group sponsored the Movember charity for men's health. Their target was for £25.00 to be raised from a £2.00 per moustache minimum entry fee for a "best moustache" competition. The prize was 6 bottles of Desperado beers for best "tache" or "Mo".

On their last playing session on 29th November the lady members of the group judged the 6 chaps present who each had a "tache" and decided they were all equal winners with each one receiving a bottle of Desperado.

Early in December all outstanding "competition fees" were collected (bar one) and the group raised the grand total of £73.00. However, the last to arrive, Guy Creswell, came with "a little more money" on top of his own donation, that he had extracted from sponsorship of his personal effort by his friends - and handed in the super-sum of £200.00.

The Esher Walking Rugby group is therefore delighted to have raised a total of £273.00 for this worthy charity, and for his superlative effort Guy Creswell was without hesitation appointed "man of the match" at their playing session last Friday.

Well done the Esher Walking Rugby Group who also inspired Esher RFC to invite local barber Salvatore La Porta to offer his experienced trimming and cutting services with willing participants to further raise funds and which resulted in an additional £217 being raised for an extremely worthwhile cause. 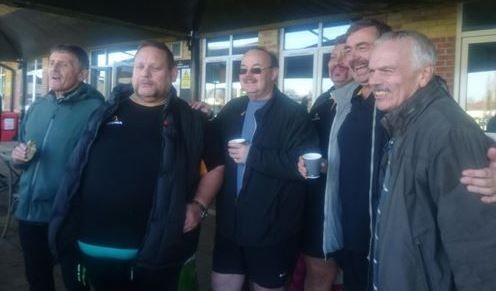