Esher moved into the top four with a fifth straight win on Saturday, surviving a late onslaught to edge out league leaders Taunton Titans with a 10-8 victory in a tense encounter at Molesey Road.

The home side made most of the early running on a damp and blustery November afternoon, gaining possession from the kick-off and taking the lead through a long range Sam Druce penalty with only 3 minutes on the clock.

With the conditions worsening as a heavy downpour set in, the early exchanges were punctuated by a series of stoppages and handling errors as both sides struggled to retain possession for any length of time.In one of the few bright moments of the half, Esher second row Cam Gentles looked set to score as he burst through the Taunton defence under the posts, only for the slippery ball to be dislodged in the tackle and lost forward over the line.

Taunton responded with their best spell of the match as the rain began to ease off around the half hour mark, kicking a penalty deep into the Esher 22 and launching a spell of pressure close to the line.The home defence was equal to the task however, holding the visitors up with some robust tackling before eventually turning the ball over to avert the danger.

Having regained possession, Esher finished the half strongly with a penalty kick to the corner in the final minute, but frustratingly for the home side a wayward throw at the lineout allowed Taunton to seize the ball and bring the first period to a conclusion.

Esher started the second half brightly, using some excellent tactical kicks from scrum-half Jack Walsh to gain territory and pin the visitors back in their own half, however their momentum was checked when Taunton full-back Gary Kingdom made a sharp line-break to bring his side back into the home 22.

Opting to take a scrum close to the line from what appeared to be a kickable penalty, Taunton went for maximum points as they took on the Esher set-piece with a strong second shove, earning another penalty when the front row went down under the pressure. Taunton elected to take the scrum again, but this time the Esher pack refused to budge as they held their ground, causing the visitors to play the ball and attempt a kick through the defence which was gratefully gathered up by the home backs.

With Esher having cleared their lines and the visitors looking to spread the ball wide inside their own half, centre Dan Rowland came flying out of his defensive line with a thunderous hit on his opposite number, dislodging the ball and sending the Taunton man sprawling with the impact.As the Taunton players turned to react, Rowland's centre partner Lennox Anwanyu was on hand to hack the loose ball forward and steer it under the posts to score the first try of the afternoon. Sam Druce added the extras to give Esher a 10-0 lead with 53 minutes played.

Taunton hit back 5 minutes later though a Gary Kingdom penalty, before Esher went close again when a break down the left-hand touchline from wing Joe Beckett brought them back into the visitors' 22.Having worked their way close to the Taunton line however, a misplaced grubber kick from the Esher backs allowed the visitors to regain possession and the move promptly broke down.

As the game entered the closing stages Taunton began to dominate possession and territory, setting up camp in the Esher 22 and launching a relentless assault on the try line. Esher responded with some fierce tackling to hold the visitors out, but after a succession of penalties the referee eventually lost patience and sent No.8 Max Berry to the sin bin.With the scoreboard clock now showing 82 minutes, Taunton finally breached the Esher line when second row Stuart Persey crashed over to score beside the posts and leave a relatively simple conversion to level the scores with the final kick of the match. But as a hush fell across the ground in anticipation of the draw, the ball somehow sailed to the right of the posts to spark jubilant scenes amongst the Esher players and supporters as the whistle blew for full-time. 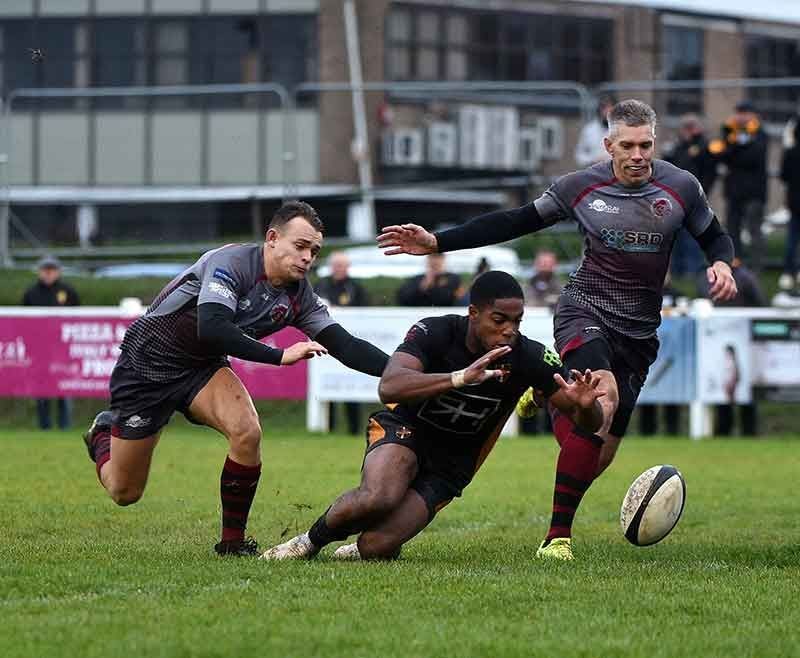