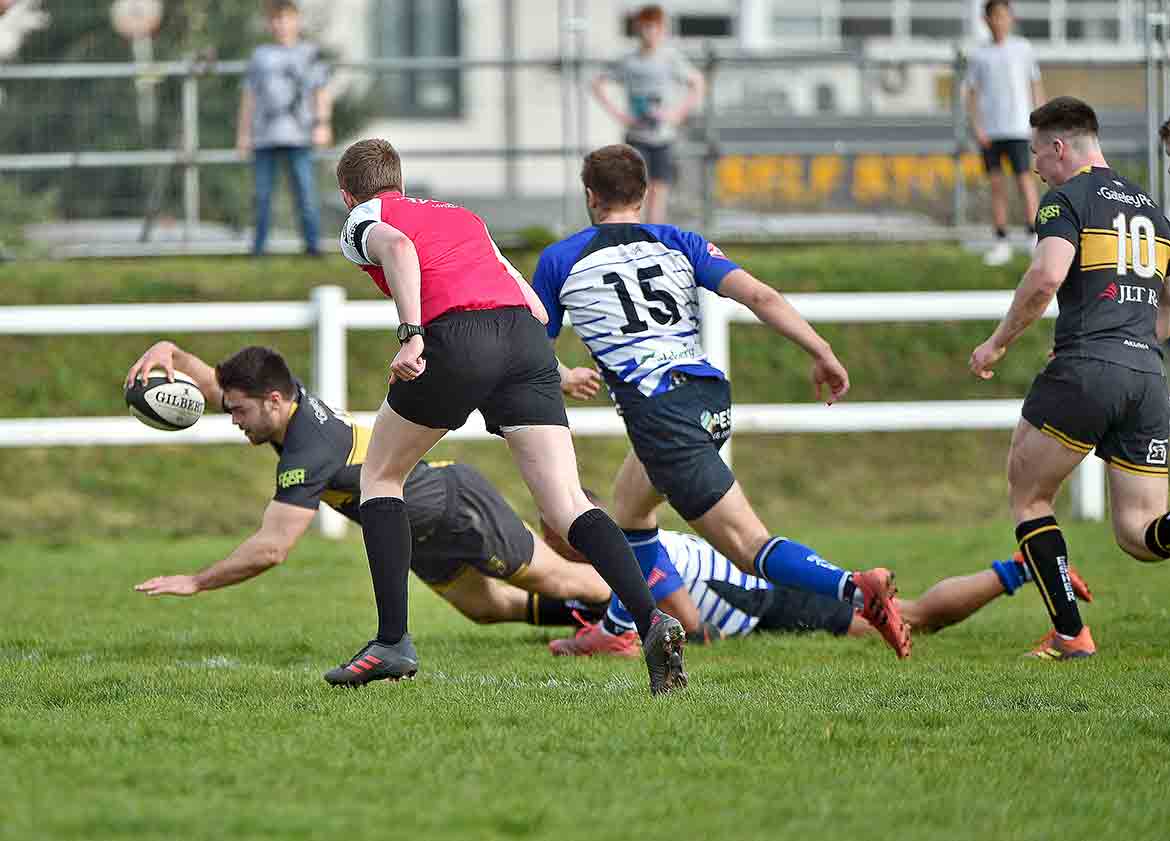 Esher kept their survival hopes alive with a dramatic late victory on Saturday, overcoming visitors Sale FC in a thrilling contest to earn a 31-29 bonus point win in the spring sunshine at Molesey Road.

With the two sides having played out a high scoring encounter earlier in the season, the game kicked off at a frenetic pace when Esher wing KariymIrving collected an Owen Waters chip over the defence in the first minute, rounding the last defender with a big hand-off before being called back for starting his run ahead of the kicker.From the resulting penalty, Sale kicked deep into the Esher half and set about building a spell of possession.After being awarded a second penalty for an infringement at the breakdown, a quick tap from the Sale backs saw the ball spread wide towards the right as the Esher defence struggled to realign, creating the space for full-back Robbie Povey to dive over in the corner. The conversion fell short, leaving the score at Esher 0 Sale 5 with only 2 minutes on the clock.

Having suffered the early setback, Esher hit back just 3 minutes later with their first try of the afternoon through full-back George Simpson.Taking the ball from a standing start on the edge of the Sale 22, Simpson cut inside his man and accelerated, weaving through the defence with a devastating turn of speed before curving round the full-back to score under the posts.Fly-half Owen Waters duly added the conversion to give the hosts a 2 point lead.

Both sides were looking to run the ball from all over the pitch as the game continued at a furious pace, but it was Esher who grabbed the next score when centre Dan Rowland was on hand to finish off a storming break from No. 8 Rob Dudley-Jones.With the Esher backs spreading the play back infield from a lineout just inside the visitors' half, Dudley-Jones came into the line at pace, bursting through the defence and racing away towards the posts.The Esher back row was eventually stopped just short of the try line by a superb tackle from the Sale wing, but Dan Rowland was in close attendance to scoop up the ball and reach over the line.Owen Waters added another conversion to give Esher a 14-5 lead with 16 minutes played.

Sale responded well to the Esher scores as they began to impose themselves in the loose, earning their second try of the match in the 32nd minute when No. 8 Ryan Parkinson crashed over beside the posts from close range, with fly-half Kieran Wilkinson adding the extras.With the visitors continuing to press, a third try followed on the stroke of half-time when centre Connor Doherty picked a good line to cut through the Esher defence and run in under the posts.Wilkinson slotted the conversion to make the score going into the break Esher 14-Sale 19.

Esher made a strong start to the second period, securing possession from the restart and pushing the visitors back into their own half as they worked through a series of phases and driving mauls.The pressure was beginning to mount as the home forwards pounded away at the Sale defence, but with the Esher pack drawing ever closer the referee deemed that they had been held up over the line.From the resulting scrum, Jack Walsh gathered the ball and darted to his left, using centre Tom Cheeseman as a decoy before cutting back inside and running in under the posts to level the scores.Waters added the conversion to give Esher the lead after 52 minutes.

The visitors responded almost immediately however, when centre Doherty broke through the Esher defence again with another powerful run to score his second try of the game in the 54th minute and bring up his side's bonus point.Replacement fly-half Emiliano Calle Rivas added the conversion to extend the visitors' lead to 5 points.

As the home team began to take charge of possession again, Sale actually increased their lead when a foray into home territory resulted in an opportunistic drop goal for Calle Rivas in the 69th minute.The scoreline and pattern of the match would have had a familiar feeling for home supporters this season, but the Esher players fought their way back into the game, earning a penalty 3 minutes later for Owen Waters to reduce the score to Esher 24-Sale 29.

The hosts were in the ascendancy now, raising the tempo as they spread the ball around at pace in search of a final score to win the game.And as the clock ticked down on the match, and possibly Esher's league status, winger Joe Beckett duly stepped up with the killer try in the 76th minute to send the Esher crowd into raptures.Working the ball to the left just inside the Sale half, quick hands down the line from the Esher backs found Beckett advancing into space on the left wing.Taking the ball at speed, Beckett burned down the touchline past his opposite number, outpacing the covering defenders as he raced away to score under the posts.Owen Waters held his nerve to slot the conversion, giving Esher a 2 point lead and effectively sealing what could turn out to be a potentially priceless win for the home side.

With other results going against them however, Esher still find themselves rooted to the foot of the table, but after a morale boosting win and with 3 games still remaining, the Surrey side are still alive and the great escape is still on for at least another week.