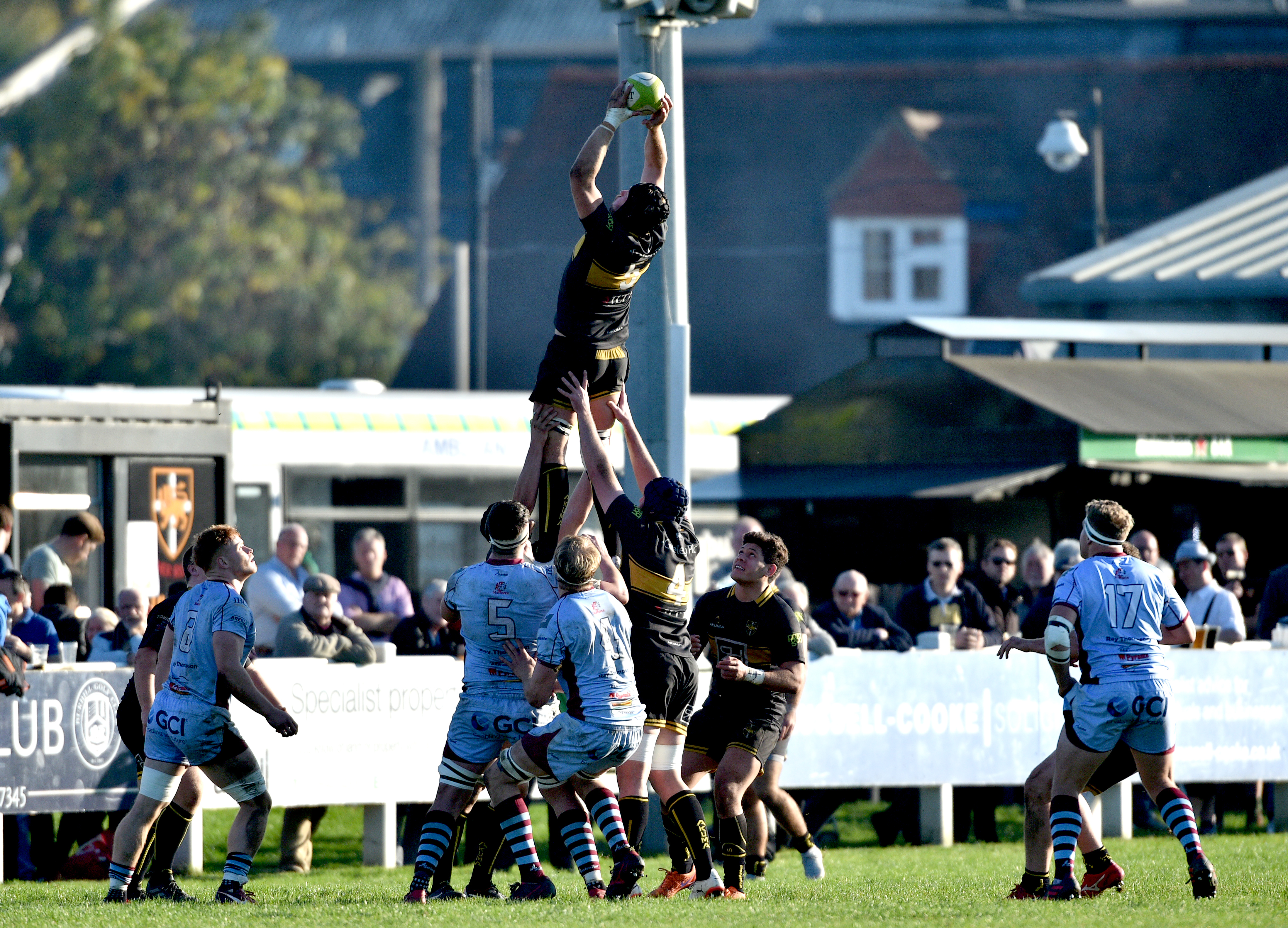 Esher suffered a 45-15 defeat to visitors Rotherham Titans at Molesey Road on Saturday, producing a spirited second-half performance but ultimately falling well short after a loose opening half hour had left them with a mountain to climb against the South Yorkshire side.

On a clear and bright autumn afternoon, the visitors opened the scoring after just 2 minutes when a charged down kick on the half-way line resulted in a try for fly-half Joe Barker.As the ball rebounded back into the Esher half, Rotherham were quickest to react by gathering possession and racing towards the line behind a flat-footed defence.Winger Kariym Irving chased down the ball carrier and looked to have prevented the try, but as the Rotherham man went to grounda neat one-handed offload found Barker in support, who showed a clean pair of heels to score under the posts.Scrum-half Alex Dolly added the extras to give the visitors a 7 point lead.

The home side responded well to the early setback, going close to the Rotherham line with a driving maul and enjoying a spell of possession in the visitors' 22 before eventually being reward with an Owen Waters penalty in the 9th minute.Having worked their way back into the game however, Esher promptlygifted the visitors with their 2nd try of the afternoon just 4 minutes later when an underhit box-kick from inside the home 22 went straight to Rotherham wing Henry Roberts.As the ball hung in the air and the Esher backs pushed up to chase the kick, Roberts was able to gather the catch and show a good turn of pace to sprint away and score, with Dolly adding the conversion for good measure.

Esher were proving to be the architects of their own downfall in the first half, next missing a penalty to reduce the arrears in the 18th minute and then falling even further behind when an intercepted pass on the half-way line allowed Rotherham No. 8 Seb Nagle-Taylor to race away behind the defence and score under the posts.Dolly added the conversion to make the scorelineEsher 3-Rotherham 21 after just 22 minutes.

With the home side still reeling from the barrage of early scores, Rotherham began to raise their intensity and duly registered their bonus point try in the 30th minute following a spell of pressure in the Esher 22.Taking the ball from the base of a scrum around 10 yards from the line, Rotherham No. 8 Nagle-Taylor was able to ride the initial tackle from the Esher back-row, before offloading to scrum-half Dolly to dive over in the corner.The conversion was short to leave the score at half-time Esher 3-Rotherham 26.

Any hopes of an Esher fightback were quickly dispelled when Rotherham scored their 5th try of the game directly from the restart.Hoisting a high kick-off towards the left-hand touchline, the visitors seized possession and passed back infield to Nagle-Taylor who sprinted through a gap in the Esherdefence to score from the 10 metre line.Dolly added the conversion and from that point Rotherham went on to dominate the 3rd quarter, causing problems for the home side with their strong set piece and incisive running lines before racking up another well-worked try from Connor Dever in the 54th minute.The conversion went wide but the visitors now ominously held a 35 point lead with 26 minutes left to play.

From the home side's perspective anything that could go wrong had been going wrong, but Esher showed great spirit as they rallied in the final quarter, throwing the ball around and making a series of line breaksbefore sending second-row Cameron Gentles over to score in the corner.Owen Waters added the conversion from the touchline to make the score after 69 minutes Esher 10-Rotherham 38.

A second try for the hosts followed just moments later when replacement flanker Andy Hore plucked the ball out of the air from the restart, breaking through several tackles before releasing wing Joe Beckett just inside the Rotherham half.Beckett set off on a scorching run down the line, turning the pursuing defenders inside out to eventually dive over and score in the right-hand corner.The conversion went wide, but Esher were starting to sense the outside possibility of a bonus point try and salvaging something from the game.

With Esher now throwing caution to the wind however, Rotherham were able to force a turnover and cut through the home defence, running in another converted try under the posts in the 73rdminute through wing Henry Roberts to cap an impressive display from the visitors.

Both sides finished the match in enterprising style as they tried to run the ball from all over the pitch, but with the game deep into overtime and Esher back in their own 22, Owen Waters decided that enough was enough and punted the ball into touch to bring events to a conclusion.