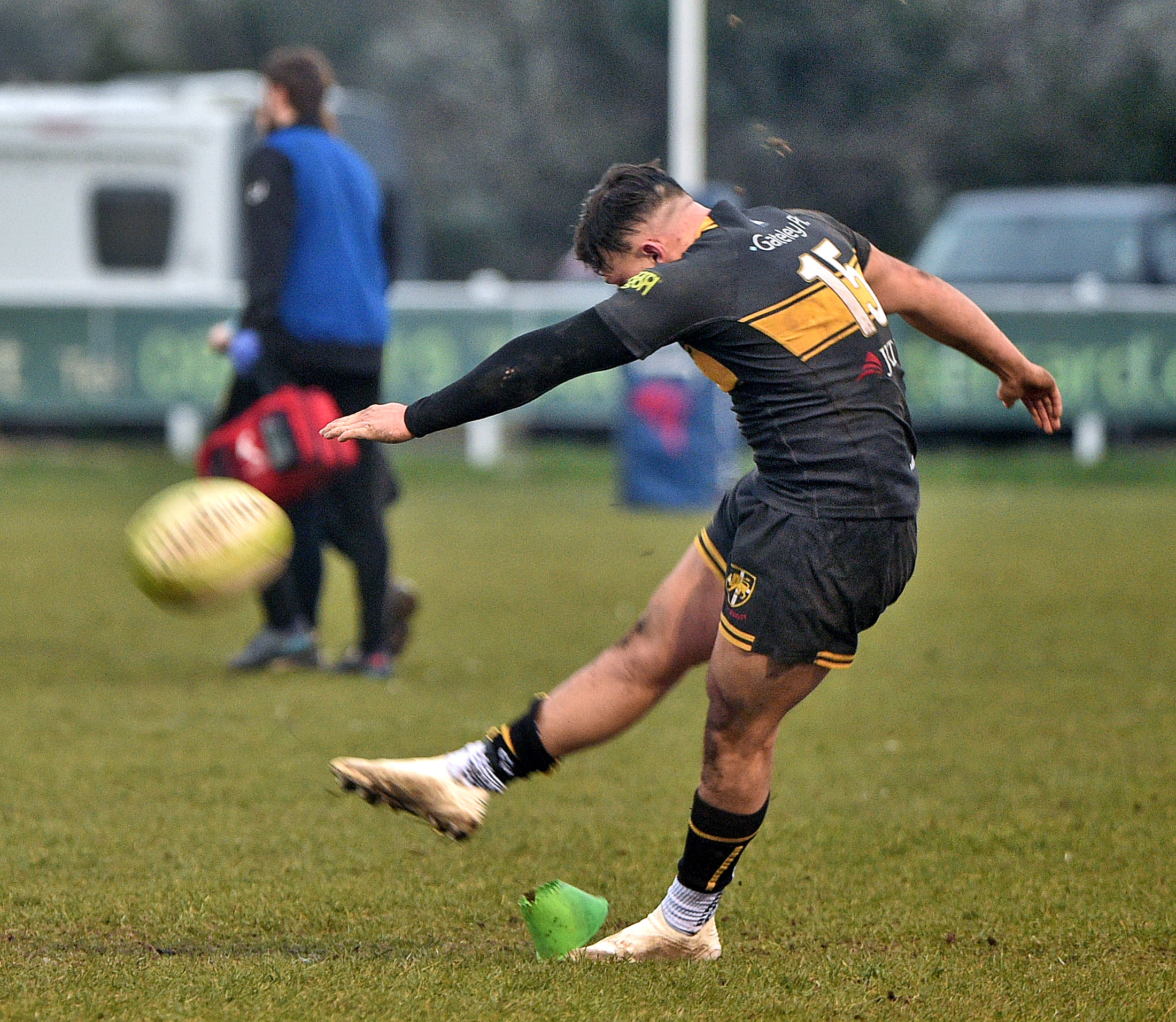 Esher suffered a narrow 13-17 defeat in a tempestuous local derby match with Rosslyn Park on Saturday, pushing the promotion contenders close with a combative performance, but ultimately having to settle for a losing bonus point after being reduced to 13 men in the closing stages.

On a blustery spring afternoon at Molesey Road, it was the visitors who were fastest out of the blocks, using their large and mobile pack to good effect as they pinned the home side back with an early spell of pressure.As the Park forwards battered away at the Esher line, second row Adam Frampton eventually forced his way over to score under the posts from close range in the 4th minute, withGreg Lound adding the extras to give Park a 7 point lead.

Park continued to press as they looked to build on their advantage, but some resilient Esher defending ensured that the scoreline remained intact.Having turned the ball over around the 10 minute mark, Esher went on to dominate possession for the next half an hour, spending long periods in the visitors' territory but finding themselves unable to break down a stubborn Park defence.A Paul Roberts penalty drifted wide in the strong cross-wind, before Park responded with a late rally towards the end of the half, resulting in a penalty slotted by Lound in the 40th minute to make the half-time score Esher 0-Rosslyn Park 10.

Esher came out firing after the break, winning a penalty in the opening minute from a powerful looking scrum just inside the Park half.As scrum-half Jack Walsh looked to take a quick tap however, his opposite number Jack Gash failed to retreat 10 metres, halting the move and in the process earning himself a 10 minute spell in the sin bin.Paul Roberts stepped up to convert the resulting penalty and register Esher's first points of the afternoon with 41 minutes played.

More pressure from the hosts resulted in their first try of the game just 11 minutes later, when hooker Jack Musk was on hand to finish a well-worked move in the left-hand corner.Changing the direction of attack from a maul on the edge of the Park 22, Jack Walsh found prop Ollie Mines steaming up in support to his left.Mines produced a burst of speed as he charged towards the linebefore drawing his man with a deft pass to send Jack Musk racing over in the corner.The attempted conversion fell short, leaving the score at Esher 8-Rosslyn Park 10 after 52 minutes.

Park responded with theirsecond try of the game in the 58th minute, after a sweeping move started from deep within their own half was smartly finished off under the posts by winger Benjie Marfo.With the Park backs looking to spread the ball wide from just outside their own 22, the Esher defence appeared to have the situation under control, but a missed tackle on a prop joining the line created the space for Marfo to sprint away and score.Lound added another conversion to increase the visitors' lead to 9 points.

The hosts hit straight back however, when a perfectly timed miss pass from Paul Roberts cut out two defenders to find winger George Simpson on the right-hand touchline midway inside the Park half.Still with a man to beat, Simpson placed a delicate kick over the remaining defender's head, turning his man before winning the footrace to gather the ball and score in the corner.The conversion was unsuccessful, but Esher were now well and truly back in contention with a quarter of the match left to play.

Esher were in the ascendancy by this point, but as they piled forward in search of another score to take the lead, the game turned back towards the visitors when blindside flanker Harrison Collins was shown a straight red card in the 67th minute.As the home side committed bodies to a ferociously contested ruck on the edge of the Park 22, the referee brought a halt to proceedings after an intervention from the touch judge.Following a brief consultation with his assistant, the red card was produced for punching and the Esher back row was sent from the field.Given the location on the pitch few in the ground would have had a good view of the incident, although the Esher players closest to the action were of the opinion that Collins was not the sole protagonist, by apparently retaliating to an offence not seen by the officials.Others may of course have a different interpretation of events, but the decision was made and the home side's momentum promptly stalled as Park regained possession.

Matters became even more perilous for the home team 5 minutes later, when another intervention from the assistant referee on the opposite side of the field resulted in wing George Simpson being sent to the sin bin.As the Esher man attempted to extricate himself from a tussle on the ground, the referee's assistant deemed that Simpson had placed a boot on the chest of an opponent "whilst not applying any pressure."Having been on the front foot and pressing to win the game only a few minutes earlier, Esher were now forced into a rearguard action with just 13 men for the rest of the match as they looked to hold onto their losing bonus point.The visitors duly seized the initiative as they began to dominate possession and territory for the final few minutes, but Esher's depleted defence held firm until the referee signalled time was up and Jack Gash kicked the ball into touch to bring events to a conclusion.