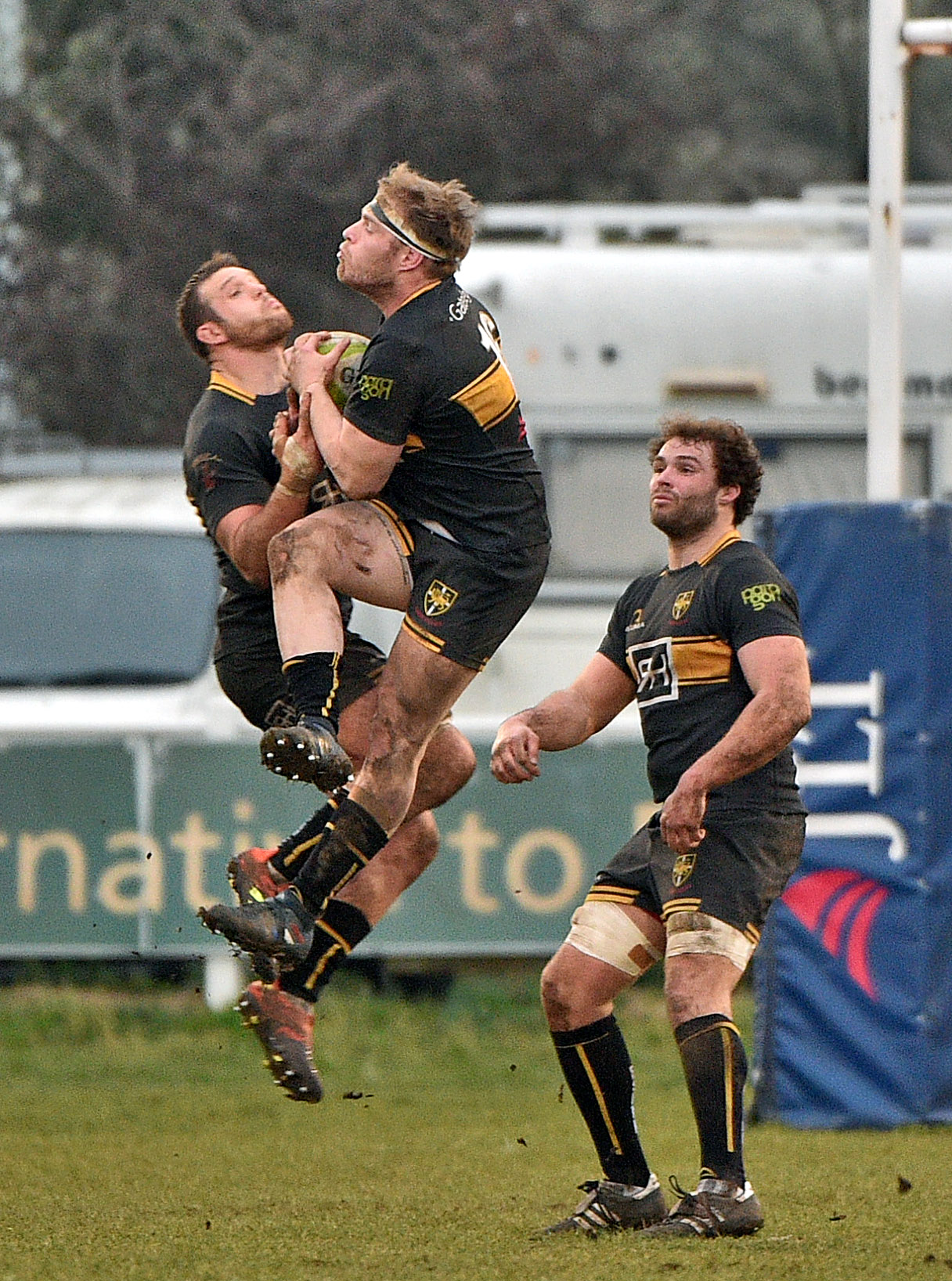 Esher went down to a late defeat against league leaders Old Ethamians on Saturday, fighting back from a 14 point deficit to trail the visitors by just 3 points in the closing stages, before conceding two tries inside the last 8 minutes to suffer a 17-34 loss.

The game started brightly for the home side, with the visitors being reduced to 14 men in the 2nd minute after a no-arms tackle from second row Adam Batt on Esher full-back George Simpson.Esher promptly seized possession and piled into the visitors' half, showing good intensity as they spread the ball around and gained ground through some strong carries from the forwards.OEs were defending well however, and after turning the ball over they quickly worked their way back into Esher's half, spinning the ball down the line for wing George Perkins to race down the touchline and score in the corner.Fly-half Joe Carlisle added the conversion to give the visitors a 7 point lead with 9 minutes played.

A second try for the visitors quickly followed, with Esher looking to force the play from just inside their own half.A loose pass in the midfield fell short of its target, before being fumbled and then gathered up by the OEs backs.As the Esher backs struggled to realign, the ball was spread wide to winger Perkins who made no mistake with the finish to score his 2nd try in the corner.Carlisle slotted another conversion from the touchline to make the score Esher 0-Old Elthamians 14 after only 14 minutes.

Esher had been contributing to some of their own problems at this stage by coughing up possession from a series of lineouts, but the home team gradually began to claw their way back into the match, with club legend Tom Cheeseman in particular providing some inspiration in the midfield to help drive his side forward.Having worked their way into the OEs 22, the Esher pack launched a driving maul from a lineout, crashing over the try line in the right-hand corner with winger Kariym Irving coming up with the ball to claim the score.George Simpson added the conversion to reduce the arrears to 7 points with 24 minutes on the clock.

OEs extended their lead with a Joe Carlisle penalty in the 31st minute, before Esher responded with their 2nd try of the afternoon on the stroke of half-time.Taking the ball from a scrum close to the OEs line, the Esher backs spread the play back infield, before finding fly-half Basil Strangaround 5 yards out.Strang cut back inside and pivoted, showing good strength and footwork as he wrestled his way through a cluster of defenders to ground the ball over the line.The conversion was unsuccessful, leaving the half-time score at Esher 12-Old Elthamians 17.

The visitors raised the tempo at the start of the second half, pinning the home side back with a series of well-executed tactical kicks as they piled forward and began to dominate possession.Esher's defence was holding out however, with OEs only able to add to their lead in the 56th minute through another Carlisle penalty.

Having weathered the storm, Esher responded with a spell of pressure in the OEs half, earning a penalty kick to the corner in the 61st minute.Gathering the ball from the resulting lineout, the forwards launched another powerful driving maul to send second row Devin Montgomery over in the corner for their 3rd try of the match.The conversion fell short to leave the score at 17-20, but Esher were now well and truly back in contention.

With the result in the balance however, the match tilted decisively back in the visitors' favour when Esher captain Charlie Gossington was sent to the sin bin in the 71st minute.A break from the visitors into the Esher 22 looked to have come to an end when the ball was lost forward in the tackle, but the referee adjudged that Gossington had taken a man without the ball and showed no hesitation in awarding the penalty and brandishing a yellow card.OEs opted for the lineout and with the referee having signalled advantage for another infringement, a cross-field kick was hoisted to the opposite touchline where winger Dom Lespierre was advancing.Lespierre timed his run well to gather the ball and dive over in the corner, with Tom White adding the conversion to extend his side's lead to 10 points.

OEs were now pushing for their bonus point having effectively sealed the result, and a 4th try duly arrived in the 77th minute when Lespierre went over in the corner again to add a touch of gloss to the scoreline.White slotted another difficult conversion from the touchline to make the final score Esher 17-Old Elthamians 34.

And whilst the margin of defeat may not give a true reflection of the home side's endeavours, Esher can take great pride and belief from their performance ahead of the final few games in their quest for National League One survival.