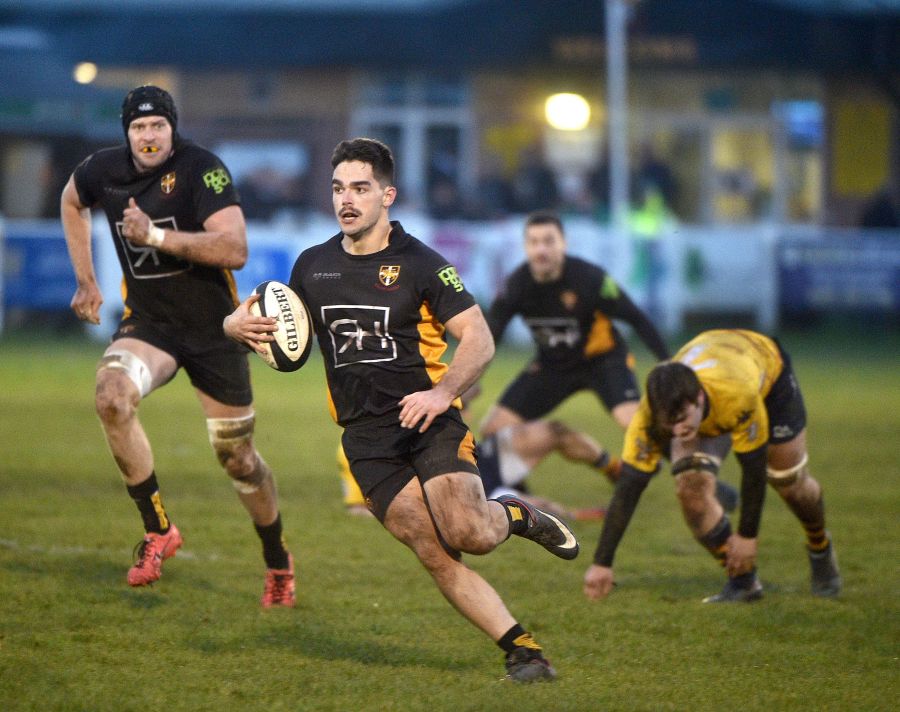 Esher got their season back on track again on Saturday with a much needed bonus point win, overcoming visitors Old Albanian with a commanding second half display to secure a 31-20 victory in an incident-packed encounter at Molesey Road.

With the conditions set for a dry but bitingly cold afternoon, the home side were forced into some early defending as the visitors started the game on the front foot, soaking up a lengthy period of pressure from the OA's forwards before eventually turning the ball over close to their own line.Having weathered the opening storm,Esher responded with their first meaningful passage of play, pushing the visitors back and drawing out a yellow card to hooker Jamie Townsend for a tip tackle on his opposite number Devlin Hope in the 10th minute.

The hosts were beginning to play with real purpose and intensity by this stage, working their way into the OA's half and spreading the ball down the line at speed towards left wing James Booth.Making his home debut for the club, Booth promptly announced himself to the Molesey Road crowd with a searing break down the touchline, beating several defenders before passing back inside to send second row Cam Gentles galloping home under the posts to score.Tristan Roberts added the extras to give Esher a 7-0 lead with 12 minutes played.

Things got even better for the home side just 3 minutes later, when another sweeping move found James Booth in space again on the edge of the OA's 10 metre line.Booth took the ball at pace and set off on another dazzling run, beating the first man before accelerating down the line to outstrip the covering defence and dive over in the corner.Tristan Roberts slotted the conversion from the touchline to extend Esher's lead to 14 points.

Despite the quickfire double score, errors were starting to creep into Esher's game as the visitors began to fight their way back into contention. OA's fly-half Morgan Thompson cut the deficit with a penalty in the 19th minute, before centre Tom Bendall ran in his side's first try of the afternoon within a minute of the restart.With Esher looking to launch an ambitious counter-attack from their own 22, the ball was lost forward in the tackle and gathered up by Bendall who duly raced away to score under the posts.Thompson converted the try to cut Esher's lead to just 4 points.

The visitors were in the ascendancy now, taking the lead with their second try of the game in the 26th minute, albeit in slightly contentious circumstances.After another dropped pass deep inside Esher territory, the visitors were quick to gather possession and set up a ruck close to the try line, committing defenders to the breakdown before spreading the ball out wide towards the right-hand corner.Taking a pass close to the touchline however, it appeared to many inside the ground that OA's centre Bendall had lost control of the ball as he crossed the line.The officials seemed uncertain as to what had happened, and after a short discussion the benefit of the doubt was given to the attacking side and the try was duly awarded.Thompson added the tricky conversion to give his side a 17-14 lead heading into the break.

Esher made a strong start to the second period, with replacement hooker Ben Atkins making a rampaging break into the OA's 22 from his own half as they began to build a spell of pressure.The visitors were able to keep Esher at bay with some resilient defending however, turning the ball over and working through the phases before extending their lead with a long range penalty in the 53rd minute.

As Esher looked to mount a response, the visitors were reduced to 14 men again shortly after the restart when centre Tom Bendall was shown a yellow card for failing to sufficiently use his arms in a tackle.The home side promptly seized the initiative by setting up camp in the OA's half with some powerful play from the forwards, eventually sending a driving maul over in the corner for Cam Gentles to come up with his second try of the afternoon in the 60th minute.Roberts hit the post with his attempted conversion to leave the score at Esher 19 – OA's 20.

The momentum was now well and truly back with Esher as they piled forward in search of another score, wrapping up their bonus point try when James Booth raced away to score again in the 68th minute.With the Esher backs spreading the ball towards the left wing just inside the OA's half, second row Cam Gentles joined the line at pace before releasing Booth down the touchline with a neat offload.Still with work to do, Booth sprinted down the outside channel and then cut back inside his man, rounding the last defender to finish expertly under the posts.Roberts added the conversion to give Esher a 6 point lead with 12 minutes left to play.

With the game entering the closing stages, Esher made certain of the result when right wing Tom Mitchell rounded off another move to score in the corner in the 75th minute. OA's full-back Johno Wicks was also shown a yellow card for a high tackle in the build-up, before the attempted conversion from Roberts fell short of the target.

The visitors regained possession from the restart as they fought to salvage something from the match, however play was brought to a halt when OA's centre Tom Bendall stepped inside the defence and appeared to be felled by a mistimed tackle from his opposite number Dan Rowland.After a brief consultation with his assistant, the referee brandished a red card for making contact with the head, but thankfully the OA's man was able to resume the game and both players sportingly shook hands before Rowland left the field.

There was still time for one final attack from the visitors, but the Esher defence held firm to deny them a losing bonus point and finish a tough run of November fixtures with a hard fought and well-deserved victory.