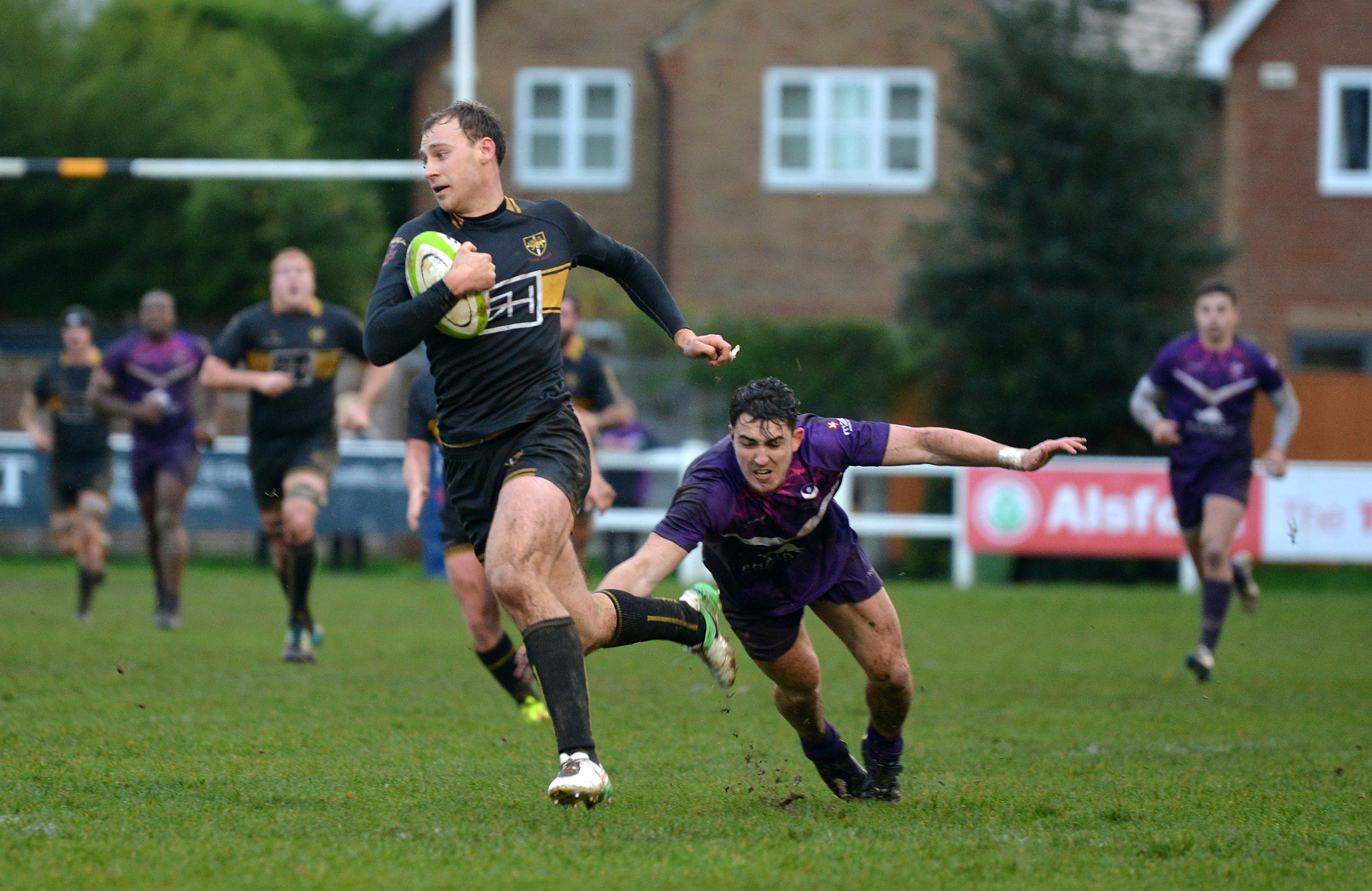 Esher made it back to back wins on Saturday, following up their high scoring victory at Sale by beating visitors Loughborough Students 17-14 in a tense encounter at Molesey Road.With the two teams occupying precarious positions in the table at the start of the day, the match had already taken on a must-win status for both sides, but it was Esher who held their nerve to take the points in a closely fought battle.

A downpour shortly before kick-off ensured that the game would be played on a heavy surface, with puddles of standing water appearing on the pitch as the first half got underway. Despite the conditions however, the visitors got off to a bright start when second row Thibaud Flement made a break from his own half in the first minute, surging into the Esher 22 before eventually being brought down as the home defence regrouped. A spell of Loughborough possession ensued as they battered away at the Esher line, but having been held out by the home defence, an ambitious pass in the midfield was fumbled and knocked straight into the arms of Esher centre Basil Strang. The Esher man promptly pinned his ears back and sprinted away, finding an extra gear as he evaded a despairing tap-tackle from the last defender to score under the posts from almost the length of the field. Paul Roberts added the conversion to give Esher a 7 point lead with 15 minutes played.

Loughborough responded well to the Esher score, showing good creativity and handling skills in the backs as they worked their way back into home territory from the restart.More possession and pressure followed from the visiting forwards, eventually resulting in their first try of the day when scrum-half Jack Moates darted over to score from close range. Full-back Charlie Reed added the conversion to level the scores after 24 minutes.

Paul Roberts restored Esher's lead in the 35th minute after a dominant scrum from the home side was rewarded with a penalty in front of the posts, but the visitors finished the half strongly as they continued to put pressure on the Esher line. More attacks followed, however some robust defending from the home forwards ensured that Esher would head into the break holding a slender 3 point advantage.

Loughborough started the second half as they finished the first, pinning the home side back with a perfectly weighted kick to the corner in the opening minutes. At the resulting lineout Esher contrived to knock the ball on, leading to another spell of possession for the visitors from which centre Harry Priestner was able to find a gap and dive over to score in the 45th minute.Reed added the extras to make the scoreline Esher 10-Loughborough Students 14.

Having spent much of the game defending up to this point, the Esher forwards were now beginning to impose themselves as they worked through the phases and started to push their opponents back. A sniping break from scrum-half Jack Walsh brought them to within a few metres of the Loughborough line, and then moments later full-back George Simpson cut through again as he split the defence with a scything run.Esher looked certain to score, but with Simpson tackled as he threw the final pass to the wing, the ball went astray and flew agonisingly into touch.

The momentum appeared to have shifted by this stage as Esher regained possession and rumbled their way back towards the try line, but with the home side on the attack again, the referee brought play to a halt as tempers frayed and a fracas broke out in front of the posts. As the game eventually resumed through an Esher scrum on the edge of the 22, Jack Walsh opted to go left with a probing run, racing forward before finding George Simpson coming across in support. The Esher full-back took the ball and cut back infield with a lacerating break, turning on the afterburners as he outpaced the defence to finish a superb solo effort beside the posts. Roberts added the conversion to give Esher a 3 point lead with 14 minutes left to play.

More pressure followed from the home side as they looked to put the game beyond the visitors in the closing stages. Declining a penalty kick at goal into the teeth of the wind, Esher decided to go for the corner, but after a series of carries and drives from the forwards the ball was lost forward just metres from the line. A powerful looking scrum from the Esher pack looked to have turned possession back over again, but the referee adjudged that the home forwards had not been driving straight and awarded the visitors with a penalty

Esher regained possession shortly afterwards however, showing good game management and ball retention as they wound the clock down with multiple phases and carries from the forwards. And as the referee signalled that time was up, Jack Walsh gratefully punted the ball into touch to seal another vital win in a topsy-turvy league which continues to baffle, bewilder and entertain in equal measure with every passing week.