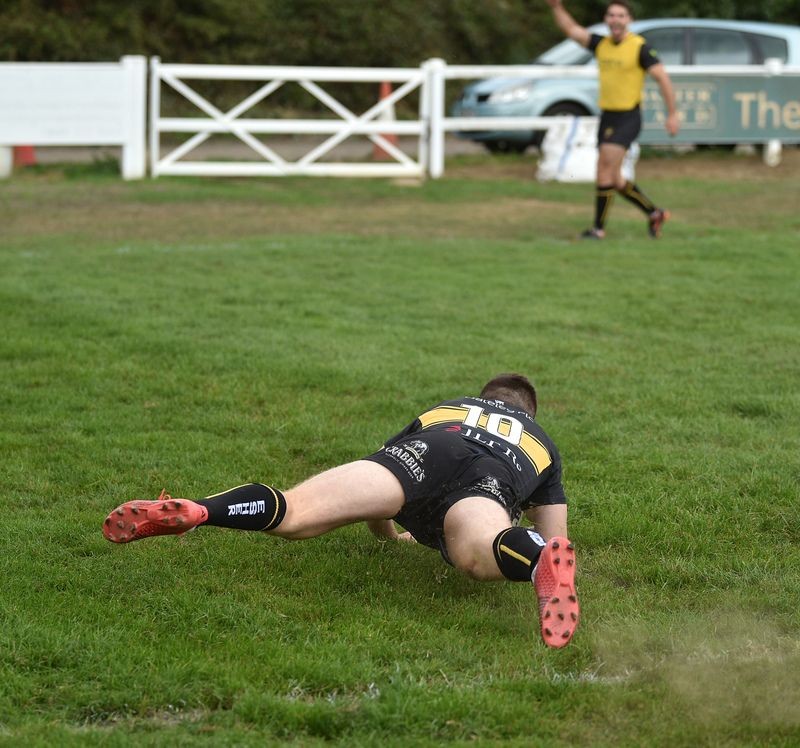 Esher battled their way to a third win of the season on Saturday, overcoming in-form visitors Leicester Lions to earn a hard fought 16-12 victory at a gloomy and overcast Molesey Road.

The home side got the match off to a dream start, scoring directly from the kick-off when second row Cam Gentles crossed the line with just 14 seconds on the clock.As Tristan Roberts hoisted the opening kick towards the 10 metre line, wing Joe Beckett was quickest to react by plucking the ball out of the air and beating the first man, before sending Gentles away with a clear run to the line.The attempted conversion fell short to keep Esher's lead at 5 points with barely a minute played.

Having made the early breakthrough, Esher were then forced to defend for the next few minutes as the visitors responded with a lengthy spell of possession, working through the phases as they pushed deeper into home territory.The Leicester attacks were repelled by some robust Esher tackling however, and after turning over possession the hosts quickly went back up the other end of the field and set up camp in the visitors' 22.Following a period of pressure close to the line, the ball was eventually spread to the right where centre James Chaumeton was on hand to force his way over from close range.Roberts narrowly missed with the conversion, to leave Esher with a 10 point lead after 25 minutes.

Five minutes later, Esher replacement Lennox Anwanyu was shown a yellow card for a tip-tackle within moments of coming on as a blood replacement for Callum Monks, but the visitors were unable to take advantage of their extra man as the home defence dug in to keep them at bay.Having absorbed a lengthy spell of pressure, Esher managed to regain possession before some strong work from the forwards earned them a penalty in front of the posts.Tristan Roberts duly stepped up to slot the kick and increase his team's lead to 13 points with 35 minutes on the clock.

Leicester hit back from the restart, seizing possession and going wide with a penalty attempt of their own, but from that point Esher finished the half strongly as they pushed towards the visitors' line.Kicking a penalty to the corner the home side looked well placed to score again, however the Leicester forwards were somehow able to force a turnover to leave the halftime score at 13-0 to the hosts.

Esher started the second period brightly, working their way into Leicester territory with a promising looking attack, only for fly-half Greg Loydall to intercept the ball and race away behind the turning home defence. With 3 Esher defenders closing him down as he approached the line, Loydall found centre Max Johnson in support to give his teammate a simple finish.The conversion was unsuccessful, but Esher's lead had been cut to 8 points with just 2 minutes of the half played.

The home side were finding themselves on the wrong end of the penalty count, again being reduced to 14 men when No.8 Lorcan Dow was sent to the sin bin for persistent team infringements midway through the half.As with the first sin bin period however, Esher showed great resolve as Leicester looked to turn the screw, keeping their opponents out before extending their lead through another Roberts penalty in the 68th minute.

With the game entering the closing stages and Esher struggling to impose themselves as an attacking force, Leicester launched another spell of possession deep in home territory, eventually breaching the defence when replacement prop James Whitcombe bundled his way over from close range in the 77th minute.Max Johnson added the conversion to set up a tense finale.

As the scoreboard clock ticked over the 80 minute mark, Leicester were awarded a penalty just inside their own half when full-back Callum Monks mistimed a tackle while chasing his own kick.With the tension increasing and Leicester looking set to launch a final attack however, the Esher forwards managed to disrupt the resulting lineout and steal the ball at the critical moment, running the clock down until the referee signaled time was up and Jack Walsh gratefully punted the ball into touch.

ESHER aim to build on defensive platform
England vs South Africa who will lift the William ...