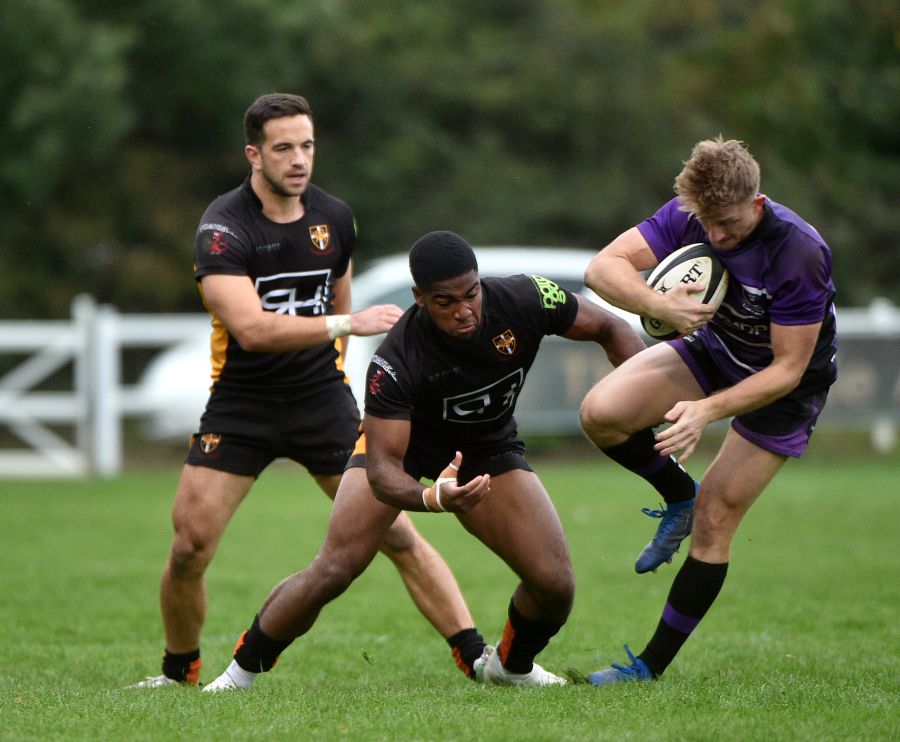 Esher slipped to their first home defeat of the season in a game of two halves on Saturday, opening up a 13 point half-time lead before suffering a second half collapse to lose 13-34 at the hands of visitors Henley Hawks.

With both sides looking to bounce back from disappointing results the previous weekend, it was Esher who made the brighter start as they took control of possession and built up a 6 point lead inside the first 10 minutes through the boot of Tristan Roberts.

More possession and territory followed from the hosts as they muscled their way into the Henley 22, pushing the visitors back with a series of aggressive runs and carries. With the referee have signaled a penalty advantage for offside, the pressure eventually told when second row Cam Gentles took a short pass from Tristan Roberts to power his way under the posts from around 5 yards out.Roberts added the conversion to extend Esher's lead to 13 points after 22 minutes.

The home side were dominating the game, but struggling to find the clinical edge to add to their advantage. It looked as if a second try might come on the stroke of half-time, but with space opening up down the right wing, centre Lennox Anwanyu's attempted kick through rebounded straight off a Henley player and behind the Esher backs into a dangerous position.Tristan Roberts was alert to the situation however, racing across to regain possession and preserve Esher's lead going into the break.

A clearly fired up Henley side emerged for the start of the second half, seizing the ball from a knock-on in the first minute and working their way deep into Esher territory through consecutive penalties.After gathering the ball from a lineout in the home 22, the Henley forwards proceeded to batter away at the Esher line until flanker Marcus Lowe broke through a gap to score his side's first try in the 44th minute.Fly-half Ben Bolster slotted the conversion to reduce the gap to just 6 points.

Esher were not helping themselves as the third quarter continued, losing 3 of their own lineouts in a row and conceding possession with a series of misplaced kicks, but the game seemed to swing decisively towards the visitors when wing Tom James was shown a yellow card for an alleged dangerous tackle in the 55th minute.

Henley wasted little time in making the most of their numerical advantage, running in their second try of the afternoon down the vacant right wing position through centre Samir Kharbouch. Bolster added the tricky conversion from the touchline to put Henley into the lead for the first time with 58 minutes played.

From that point it was one-way traffic as the rampant visitors piled on the pressure, scoring their third try just 3 minutes later when openside flanker Will Bordill crashed over from close range. The conversion hit the post, but the visitors were able to extend their lead to 22-13 through a Ben Bolster penalty in the 65th minute as the sin bin period came to an end.

The visitors continued to dominate and duly brought up their bonus point try in the 72nd minute when replacement front row George Primett crossed the line beside the posts.The attempted conversion struck the upright again, but Esher's misery was compounded when flanker Ben Davies was shown a yellow card before the restart for his part in a fracas as the ball was grounded.

With Esher unable to respond to Henley's intensity, the visitors put the result beyond any doubt when hooker Tom Emery dived over to score another close range try in the 74th minute.The conversion was added to complete a well-deserved victory for the visitors and leave Esher hoping to rediscover their form and consistency ahead of next weekend's trip to Tonbridge Juddians.