Esher marked their first game of the season back at Molesey Road with a resounding bonus point victory on Saturday, overcoming a gritty Dings Crusaders side with a brilliant display of attacking rugby to seal a 54-26 win.

After back-to-back matches on the road, Esher raced into an early lead when wing Joe Beckett plucked a floated pass out of the air on the edge of the Dings 22, cutting back infield from a standing start and sprinting through the defence to score in the corner.Tristan Roberts added the conversion to give the home side a 7 point lead with just 5 minutes on the clock

The hosts were dominating the opening exchanges, and duly extended their lead in the 11th minute when flanker Cameron Wilkins took a pass on the halfway line and outpaced the covering defence to score beside the posts.A third try followed moments later, after a break down the left-hand touchline from full-back Josh Clarke brought Esher back into the Dings half.Clarke was eventually stopped inside the 22, but the ball was recycled quickly and spread towards the opposite wing where Tom James was on hand to dot down in the corner.Roberts added both conversions to make the score 21-0 with only 13 minutes played.

Dings responded well however, gaining possession from a fumbled restart and launching a spell of possession in the Esher half.After a succession of penalties, a strong carry from winger Brad Doggett tied in several home defenders close to the line, allowing second row Oliver Bilton to crash over in the 21st minute and score his side's first points of the afternoon.Scrum-half Steve Plummer added the extras to reduce the gap to 14 points.

A frustrating spell ensued for the home side, but they were soon back on the scoresheet again when Tom James took a pass inside the Dings 22, feinting and swerving his way through the defence before accelerating away to score Esher's bonus point try in the 33rd minute.Roberts slotted another conversion to restore the 21 point margin.

With the halftime whistle approaching, it was the visitors who grabbed the next score, albeit in slightly unusual circumstances when a well-placed kick to the corner pitched just inside the touchline.The ball bounced back infield over the heads of the onrushing Esher defenders, enabling the Dings backs to regather possession and send winger Doggett racing away under the posts.Nobody in the ground seemed to be too sure what had just happened, but after a brief pause and consultation with his assistant, the referee decided to award the try, with Plummer adding the conversion.

The late score seemed to stir Esher back into action however, as they promptly went back up the other end and scored with a powerful driving maul from around 20 yards out in the right-hand corner.Roberts added the tricky conversion from the touchline to make the halftime score Esher 35-Dings Crusaders 14.

Esher started the second period brightly, carving through the Dings defence in the opening minutes before being called back for a forward pass, but from that moment the visitors went on to enjoy their best spell of the match as they seized possession and went on the attack.Having worked their way into the Esher 22 with a series of drives and carries, the Dings forwards went ever closer until the ball was shipped out wide for a well taken try in the corner by left wing Tom Hargan.The conversion fell short this time, leaving the home side with a 19 point lead after 46 minutes.

After a slightly error-strewn passage of play and a lull in the scoring, Esher began to reassert their authority on the game when a scything break from Tom James sent Josh Clarke under the posts in the 54th minute.Another try quickly followed when outside centre Dan Rowland glided through a gap in the defence on the edge of the Dings 22 and raced away to score, with Tristan Roberts adding both conversions to make it a perfect 7 kicks from 7 before being replaced by substitute Harry Priestner.

The home side were dominating the game again by this stage, bringing up their second half-century of points in consecutive matches when Cameron Wilkins emerged from a heap of bodies to claim his hat-trick try after a short range driving maul.James Chaumeton's attempted conversion drifted wide, leaving the score at 54-19 with 11 minutes left to play.

Dings refused to lie down however and kept coming at the hosts, eventually gaining reward for their endeavours when hooker Joe Hawkesby secured their bonus point with a converted try from close range in the 75th minute.

With the game entering the closing stages, Esher continued to throw the ball around in expansive style, but a final try proved to be elusive as the referee's whistle blew to bring another high scoring match to a conclusion and confirm a convincing win for the men in black and amber. 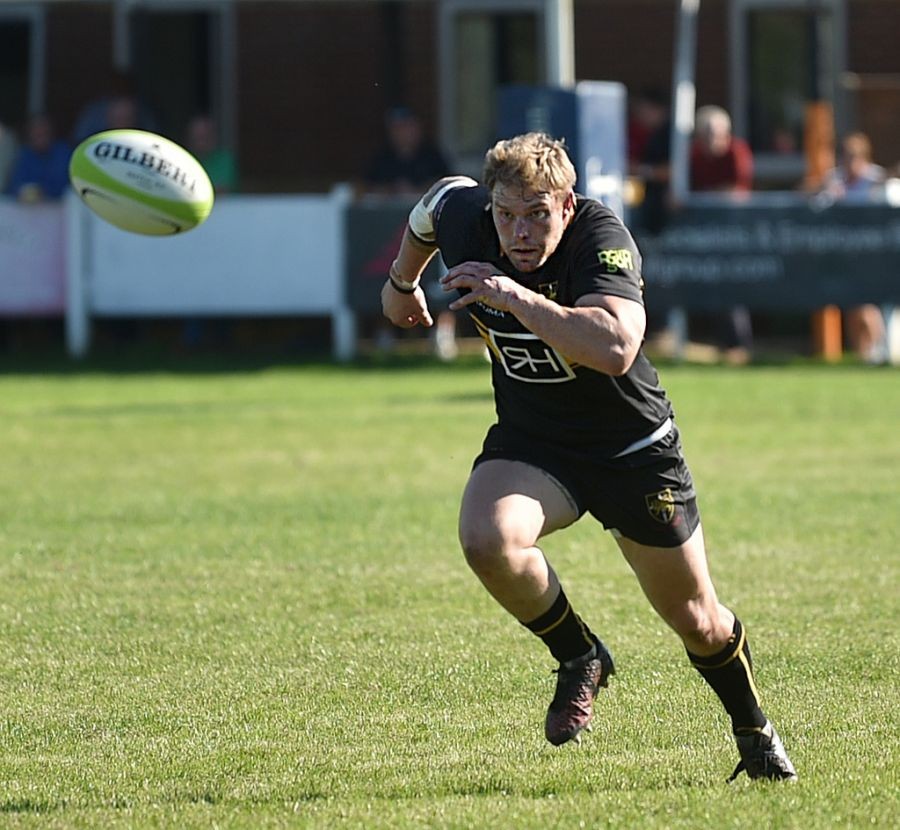