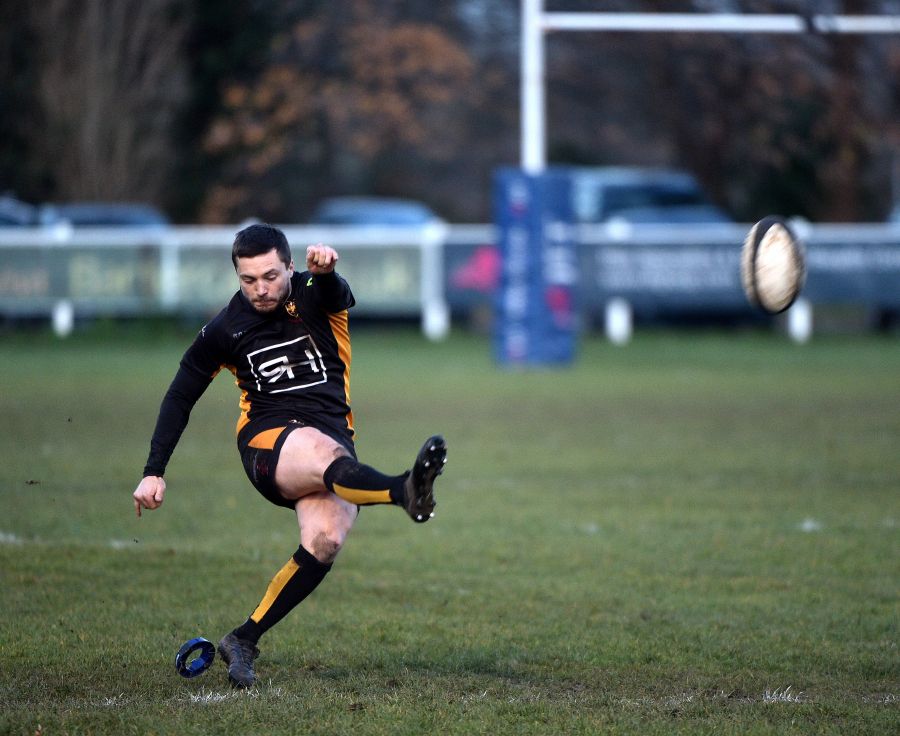 Esher produced a stirring second half fightback against visitors Clifton on Saturday, overturning a half-time deficit of 18 points to record a thrilling 32-26 bonus point win over the West Country side at Molesey Road.

The home team got off to the worst possible start as Clifton gathered possession from the kick-off and made a break down the left wing inside the opening minute. Esher's defence scrambled back to hold out the initial attack, but the ball was recycled quickly and driven towards the line by the Clifton forwards, allowing flanker Harry Bate to power over from close range and score.Fly-half Bradley Barnes added the extras to give Clifton a 7-0 lead with just 2 minutes on the clock.

Clifton were dominating the early exchanges and soon doubled their lead when a defence splitting pass on the halfway line sent the visiting backs racing into the Esher 22. Full-back Callum Monks produced a try-saving tackle close to the line, but with Clifton being awarded a penalty at the ensuing breakdown, the visitors were able to kick for touch and send a driving maul over for Harry Bate to score his second try of the afternoon.Barnes added another conversion to increase Clifton's lead to 14 points with 12 minutes played.

Esher responded with a Tristan Roberts penalty in the 16th minute, before gifting the visitors another try just 3 minutes later when centre Kieran Griffiths intercepted a loose pass on the edge of the 22 to run in under the posts.Barnes duly slotted the conversion to increase his side's lead to 18 points.

After being on the back foot for most of the first quarter, Esher were finally starting to show some signs of life as they regained possession and began to work through the phases inside the Clifton half. Kicking a penalty into the visitors' 22, the hosts launched a powerful driving maul towards the line, pushing the Clifton forwards back until hooker Devlin Hope was able to smuggle the ball out and break away for an unconverted try.

With the first half drawing to an end, Esher were beginning to play with more cohesion and intensity, but a dropped pass in the Clifton 22 allowed the visitors to regain possession and rapidly advance up the field. The home side were made to pay just moments later, as the Clifton backs cut through the defence with a sharp line break to send centre Griffiths over for their bonus point try in the corner. Barnes was short with his attempted conversion, to leave the half-time score at Esher 8-Clifton 26.

As the second half got under way, Esher were forced into defensive duties again when another dropped pass handed possession straight back to the visitors.Clifton promptly launched a spell of pressure as they went close with some rugged forward play and elusive running from their centres, before earning a kickable penalty midway inside the Esher half. With another 3 points likely to put the game beyond Esher's reach however, the match effectively turned when the kick struck the post and bounced back infield. Esher second row Cam Gentles was quickest to react, pouncing on the ball and sending a booming kick towards the halfway line to clear the danger.

Having been granted a reprieve, Esher promptly took full advantage as they scored their second try of the afternoon when a driving maul from the forwards sent Cam Gentles over in the 52nd minute. Roberts went wide with his conversion, but Esher were now back in contention with nearly half an hour left to play.

The momentum was starting to shift towards the hosts now, as Esher began to push the visitors back with a series of well-executed tactical kicks from Tristan Roberts. Clifton were defending well, but a third try soon followed when centre James Chaumeton made a scything break on the halfway line, striding elegantly through the defence before finding Tom James steaming up in support on his right. James took the ball at pace and accelerated towards the line, drawing the last man with a perfectly timed pass to send scrum-half Sam Bullock racing over beside the posts.Roberts added the conversion to cut the gap to just 6 points as the game entered the final quarter.

Esher were in the ascendancy now as they piled forward in search of another score, wrapping up their bonus point try in the 64th minute after a probing kick from Tristan Roberts found touch in the Clifton 22.Stealing possession from the resulting lineout, the hosts quickly spread the ball wide towards the opposite wing, where Callum Monks was on hand to cut through a gap for an unconverted score in the corner.

With the game entering the closing stages and Clifton doggedly holding onto their lead, Esher finally got their noses in front when fly-half Tristan Roberts placed an audacious chip kick over the defence from the halfway line. As the Clifton winger came sprinting across to cover from the left, Roberts improvised by hacking the ball forward again, beating the defender to the bounce and steering it at pace into the 22. Stooping to gather the ball, Roberts was tackled just short of the line, but his momentum sent him twisting and crashing over to finish a superb solo effort under the posts. Sam Druce added the extras to give Esher a 6 point lead with just 7 minutes remaining.

Clifton hit back directly from the restart however, seizing possession and rumbling their way towards the posts after a succession of penalties had led to a yellow card for Esher flanker Cameron Wilkins. A series of scrums followed on the try line, with the 14 men of Esher defending desperately as the visitors piled on the pressure in the dying moments.

The tension was becoming unbearable for home supporters, but as the referee signaled another scrum to the visitors with the final play of the match, the Clifton scrum-half grabbed at his opposite number and appeared to flip him over beyond a horizontal position, dropping him to the ground in a frantic attempt to snatch the ball back. After a discussion with his assistant, the referee produced a yellow card and awarded Esher with a penalty to the palpable relief of the Molesey Road crowd. And as the ball was gratefully punted into touch, the final whistle blew to put the seal on a great comeback victory for the hosts and bring a pulsating match to its conclusion.