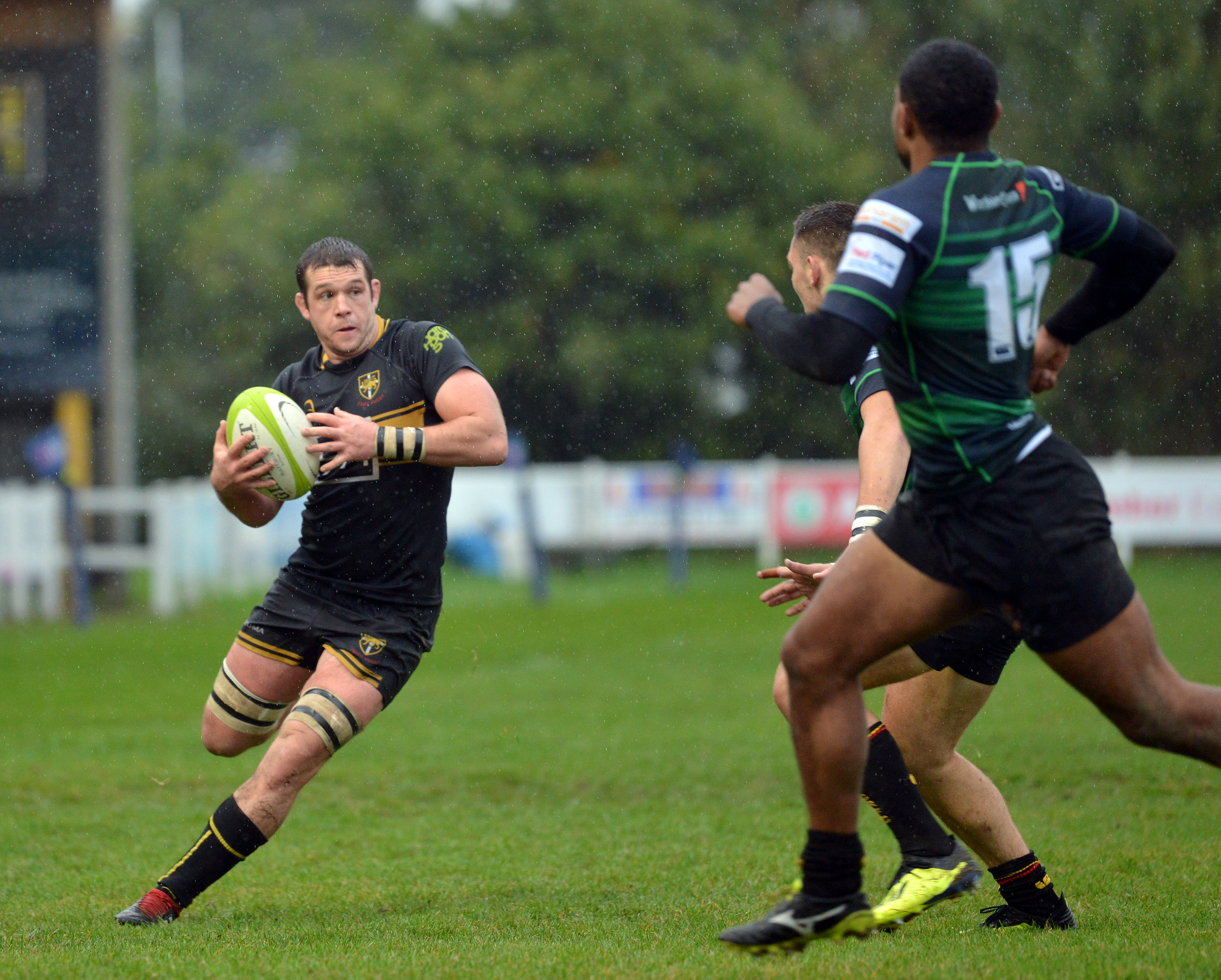 Esher battled their way to a second win of the season on Saturday, overcoming visitors Cinderford with a determined performance to earn a 10-7 victory in the rain at Molesey Road.

On an afternoon when the conditions limited the prospects of an expansive game, it was Esher who opened the scoring with a Paul Roberts penalty in the 11th minute after an early spell of possession from the visitors.The home side then began to exert a sustained period of pressure in the Cinderford half as they looked to extend their advantage, but a combination of handling errors with the wet ball and some resilient defending from the visitors ensured that the scoreline remained intact.

Having been unable to capitalise on their dominant spell, Esher were made to pay towards the end of the half when the visitors regained possession and worked their way into the home 22.Kicking a penalty to the corner, the Cinderford forwards gathered the ball from the resulting lineout and drove over the line for No.8 Harry Hone to score in the 35th minute.Fly-half Liam Hemming added the conversion from the touchline to make the score Esher 3- Cinderford 7 at half-time.

Cinderford started the second half brightly and looked set to extend their lead when a powerful scrum was awarded with a penalty to the left of the posts, but the attempted kick struck the upright and it was Esher who were quickest to react and regain the ball.The missed penalty seemed to galvanise the home side, and from that point they began to raise their intensity and push the visitors back with a series of well-executed tactical kicks.

As the rain continued to fall, Esher defied the conditions to produce a sparkling try in the 55th minute when second row Graham Logan finished off a sweeping move from deep within their own half.Receiving the ball just outside the Esher 22, wing Kariym Irving set off on a curving run, bouncing off the challenges of two defenders and then straightening his line to find centre Basil Strang in support to the left.Strang took the ball at pace, racing down the touchline before passing back in field towards the supporting Esher forwards.The pass went to ground, but Esher were able to regather the ball and quickly spread it wide towards the right flank where Charlie Gossington joined the line, making a sharp break inside the Cinderford 22 before splitting the defence with a delayed pass to Graham Logan.Still with men to beat, Logan put his head down and bulldozed his way over from around 10 yards out to score in the corner.Paul Roberts added the conversion to make the score Esher 10-Cinderford 7.

Esher were turning up the pressure now as they earned a succession of penalties in the left-hand corner, piling forward in search of another score to put some daylight between the sides with the game entering the final quarter.As the home side continued to press, Cinderford were reduced to 14 men when flanker Matthew Lane was shown a yellow card in the 66th minute, but the visitors showed a strong defence to hold Esher out and eventually turn the ball over to clear their lines.

With Cinderfordnow back to a full complement and the clock running down, the visitors launched a sustained attack on the home defence, showing good ball retention as they worked through the phases and fought their way into Esher's half.Esher responded with some robust defending and looked to be containing the threat, until a penalty in the final minute gave Cinderford the chance to kick to the corner.The tension was palpable as Cinderford secured the lineout and shaped to form a driving maul with the last play of the match, but just as the move was starting, the ball carrier collided with a man in front and the referee awarded an accidental offside to Esher.With no time left for the scrum, the final whistle blew to bring an end to another afternoon of high drama and seal a close but well-deserved win for the home side.

Tweet
CHANGE OF VENUE to the 83rd Bengal Clipper with Sh...
Esher vs Cinderford Match Line--up