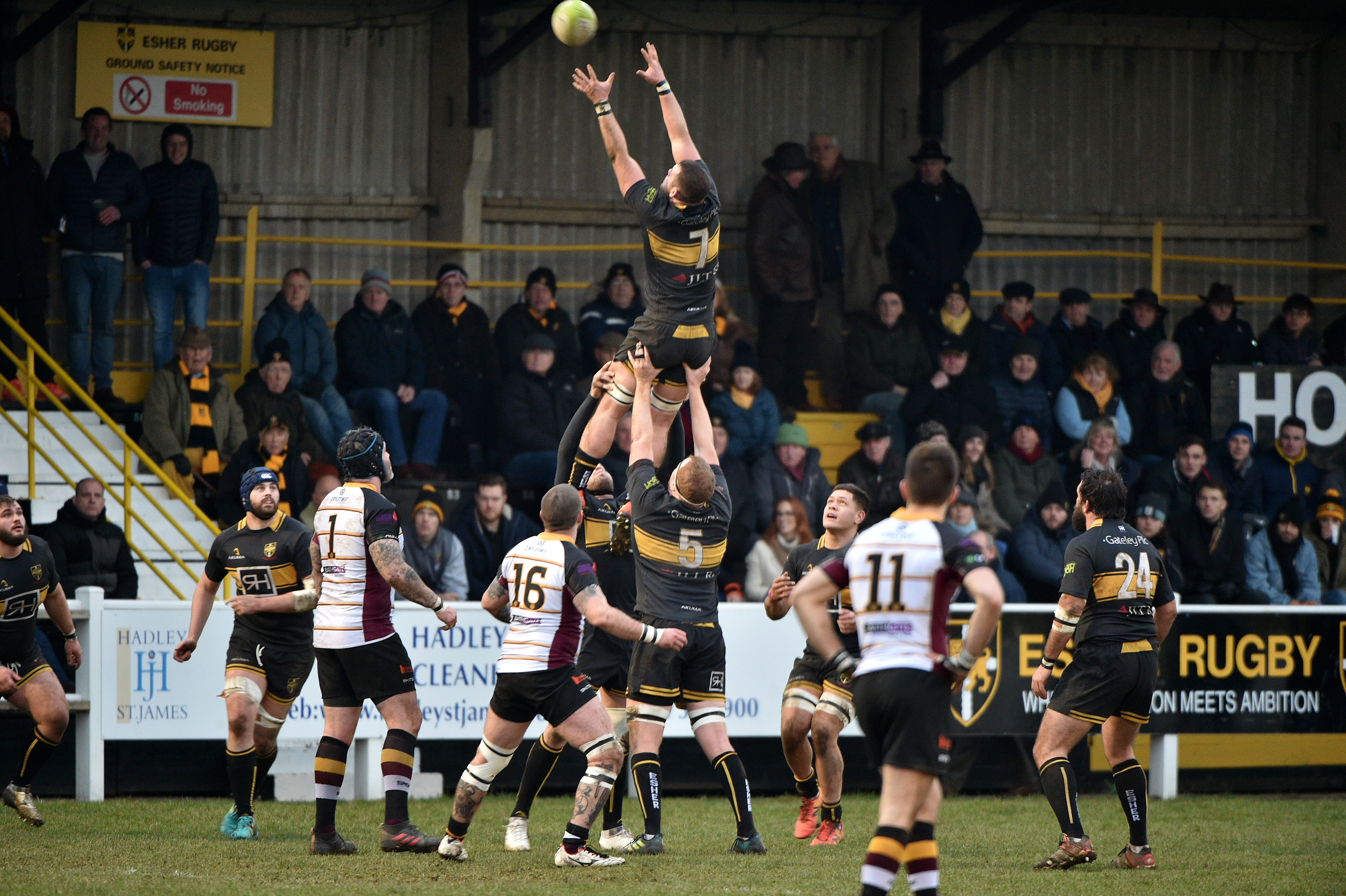 Esher fought their way to another potentially vital win on Saturday, holding off visitors Caldy RFC to earn a dramatic 17-14 victory after being reduced to 13 men in the closing stages of a tense encounter at Molesey Road.

On a cold and grey January afternoon it was the home side who made the early running, opening the scoring after just 2 minutes through winger Kariym Irving.Starting a move from just inside the Caldy half, Paul Roberts exchanged passes with Chris Arnold before releasing No. 8 Izzy Moore-Aiono on the 10 metre line.Moore-Aionobroke through the first tackle and accelerated away into the Caldy 22 until he was eventually hauled down just short of the line.The ball was recycled quickly however, with full-back George Simpson joining the line to thread a perfectly weighted grubber-kick through the defence for Irving to score in the corner. The conversion fell short to keep Esher's lead at 5 points.

The visitors responded well to the early score, pinning the home side back with a booming kick to the left-hand corner just after the restart.With the subsequent Esher lineout malfunctioning on their own try line, a lengthy spell of Caldy possession ensued as they hammered away at the home defence, working through multiple phases and carries inside the 22.Esherwere defending aggressivelyto repel the visitors' attacks however, driving their opponents back with some robust tackling before eventually clearing their lines when a loose ball was fly-hacked away into the Caldy half.

Having weathered the storm, Esher promptly went up the other end and scored their second try of the afternoon with a sweeping move from the backs.Taking the ball on the half-way line, George Simpson cut through the defence with a curving run before finding centre Dan Rowland in support to his right.Rowland quickly drew his man to put wing Tom James away into space, with the Esher wide-man angling his run towards the corner and then cutting back in at the last moment to reach over the final defender and score.Paul Roberts struck the post with the attempted conversion, to leave the score at Esher 10-Caldy 0 after 14 minutes.

Caldy fought back again with another spell of pressure in the Esher 22, but having been penalisedclose to the try line, the visitors also found themselves reduced to 14 men when second row John Collister was shown a yellow card for an off the ball incident with prop Henry Paul.The home side almost increased their lead during the sin bin period after another Tom James run down the right brought them to within touching distance of the line.Working the ball back infield, Esher looked to have men over as Caldy committed bodies to the ruck, but the pack opted to go back through the middle again and the move broke down when a penalty was awarded to the visitors.

With Caldy now back up to a full complement, a succession of penalties towards the end of the half brought the visitors back into the Esher 22.More pressure from the Caldy forwards followed, resulting in Esher'sdefence finally being breached with the last play of the half when No.8 Nyle Davidson was driven over to score from close range.Benjamin Jones added the conversion to make the half-time score Esher 10-Caldy 7.

The second half began as the first had ended, with Caldy enjoying the lion's share of possession and Esher finding themselves on the wrong end of the penalty count.As the pressure continued to build, Caldy were awarded with another penalty for a scrum infringement midway inside the Esher half.Kicking to the corner, the Caldy forwards gathered the ball from the resulting lineout and drove their way over the line to score from around 5 yards out, with Nyle Davidson emerging from the heap of bodies to claim his second try of the game.Jones added the conversion to give the visitors a 14-10 lead with 51 minutes played.

As Esher looked to stem the tide and find a way back into the game, a succession of powerful carries combined with some good interplay between the forwards and backs brought the home side back to the edge of the Caldy 22.When the ball came out from a ruck, a half-break from an Esher forward found scrum-half Calum Waters steaming up in support to slice through the defencewith a searing break and score under the posts.Roberts added the extras to giver Esher a 17-14 lead with 16 minutes left to play.

With the home side now back in front and looking to build a lead again, the game then took a further twist as Caldy made another line break through the dangerous Gavin Roberts.The Caldycentre was finally brought to ground in the Esher 22, but as the visitors piled forward Esher blindside Cameron Gentles was sent to the sin bin for a high tackle with 69 minutes on the clock.Things got even worse for the hosts when replacement No.8 Max Berry was also shown a yellow card for a side entry at a ruck just 3 minutes later, meaning that Esher would have to play virtually the remainder of the match with only 13 men.

The tension was becoming unbearable for home supporters, but with Caldy opting to turn the screw with a scrum close to the line, Esher's depleted pack somehow held their opponents up, forcing them to spread the ball out wide.A score for the visitors seemed inevitable with an overlap opening up on the right, however Kariym Irving stepped up with a monumental tackle on the Caldy second row, stopping the ball carrier dead in his tracks and forcing his man to the ground.The hit from Irving allowed Esher'sdefence to regroup for the next wave of attacks, sliding across the field in time to bundle the Caldy wing into touch just inches from the line.

With the clock now ticking into overtime, Esher regained possession and drove forwards before earning a penalty with the last play of the match.And as Andrew Fluker gratefully punted the ball into touch, the final whistle blew to bring another Molesey Road epic to an end and seal a famous win for the men in black and amber.