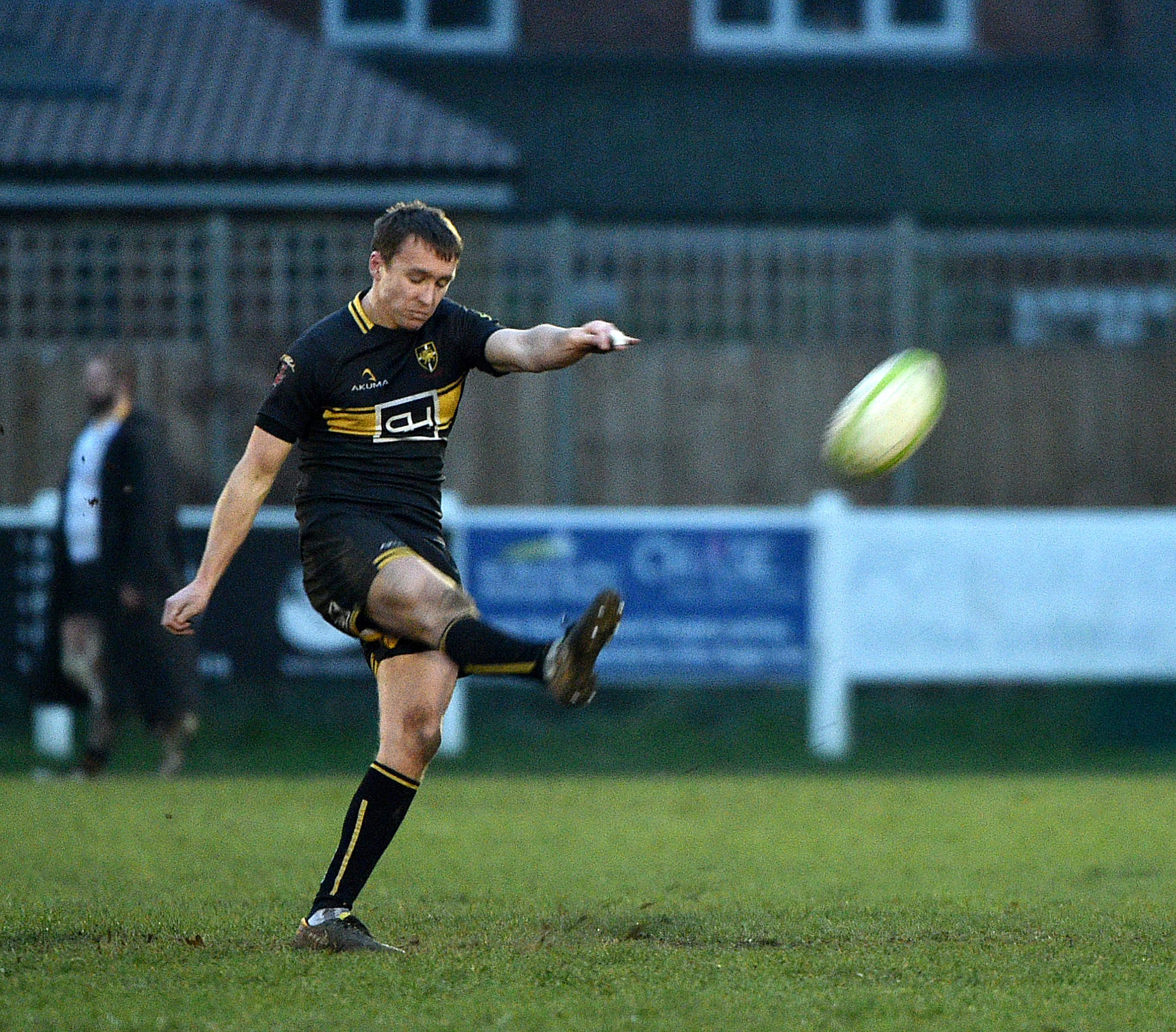 Esher slipped to another disappointing defeat on Saturday, going down 14-27 against visitorsBishop's Stortford on a bitterly cold afternoon at Molesey Road.

With just one place in the table separating the sides at the start of the day, it was the visitors who drew first blood when winger Joss Linney scored in the corner after only 8 minutes.Esher had actually started the game brightly, enjoying an early spell of pressure in the Bishop's Stortford 22 after winning a scrum penalty in the middle of the field.The hosts were unable to take advantage of their possession however, and the visitors promptly scored with their first foray into Esher territory when a perfectly weighted kick through the defence was latched onto over the line by Linney.Scrum-half Tom Banks added the conversion from the touchline to give the visitors a 7-0 lead.

From that point in the half,the visitors began to take control of proceedings as they racked up another two tries in quick succession, with full-back Nick Hankin cutting through a gap to score from close range in the 22nd minute, before a driving maul in the corner sent hooker Dec Caulfield over the line just 5 minutes later.Both tries were unconverted, to leave the score at Esher 0-Bishop's Stortford 17.

After a somewhat sluggish first half hour from the home side, Esher began to fight their way back into the match and responded with arguably the best try of the afternoon, when centre Owen Waters cut through the visitors' defence on the half-way line with a scything break in the 34th minute.Accelerating into space, Waters found centre partner Dan Rowland sprinting up in support to his left.Rowland took the ball at pace and surged forward, before drawing his man to sendKariym Irving storming down the wing with an unstoppable run to score in the corner.Paul Roberts added the conversion to reduce the arrears to 10 points and bring Esher back into contention.

Having just gained a foothold in the game however, Esher were rocked again as the visitors wrestled back the initiative by scoring their bonus point try straight after the restart, albeit in slightly contentious circumstances.Receiving the ball on the left wing, Joss Linney opted to kick ahead as Esher's defence slid across to close him down.A footrace ensued as the ball somehow bounced and rolled in a straight path just inches from the touchline, before curving back infield as it crossed the try line.From the vantage point of the stand, it appeared that Esher scrum-half Calum Waters had nipped in to ground the ball fractionally ahead of Linney, but after a brief consultation with his assistant, the referee gave the benefit of the doubt to the attacking side and the try was awarded.The conversion was unsuccessful, leaving the half-time score at Esher 7-Bishop's Stortford 22.

The second half started with Esher looking to spread the ball around at every opportunity, but a series of handling errors in the gusty conditions prevented the home side from building any momentum.As the game wore on without Esher making any serious inroads however, the dangerous Linney popped up again on the left wing with another well-placed kick behind the Esher defence.Esher's backs turned to give pursuit, but the bounce of the ball evaded the home defendersas Linney chased down his own kick to score his hat-trick try in the corner.The conversion fell short, leaving the score at Esher 7-Bishop's Stortford 27 after 55 minutes.

Esher fought back with a succession of line breaks from the backs, stretching the Bishop's Stortford defence on several occasions, before eventually scoring in the 70th minute when an inside pass from full-back Calum Monks sent replacement scrum-half Jack Walsh over in the corner.Paul Roberts added the conversion to reduce the arrears to 13 points and give Esher a glimmer of hope with 10 minutes left to play.

With Esher now frantically searching for the next score, the handling errors which had blighted their cause all afternoon returned, allowing Bishop's Stortford to regain possession and keep the play back in Esher's half.And as the clock ticked down, the visitors closed out the game to earn a well-deserved victory and leave Esher urgently hoping to rediscover their form and confidence with just 9 matches remaining.