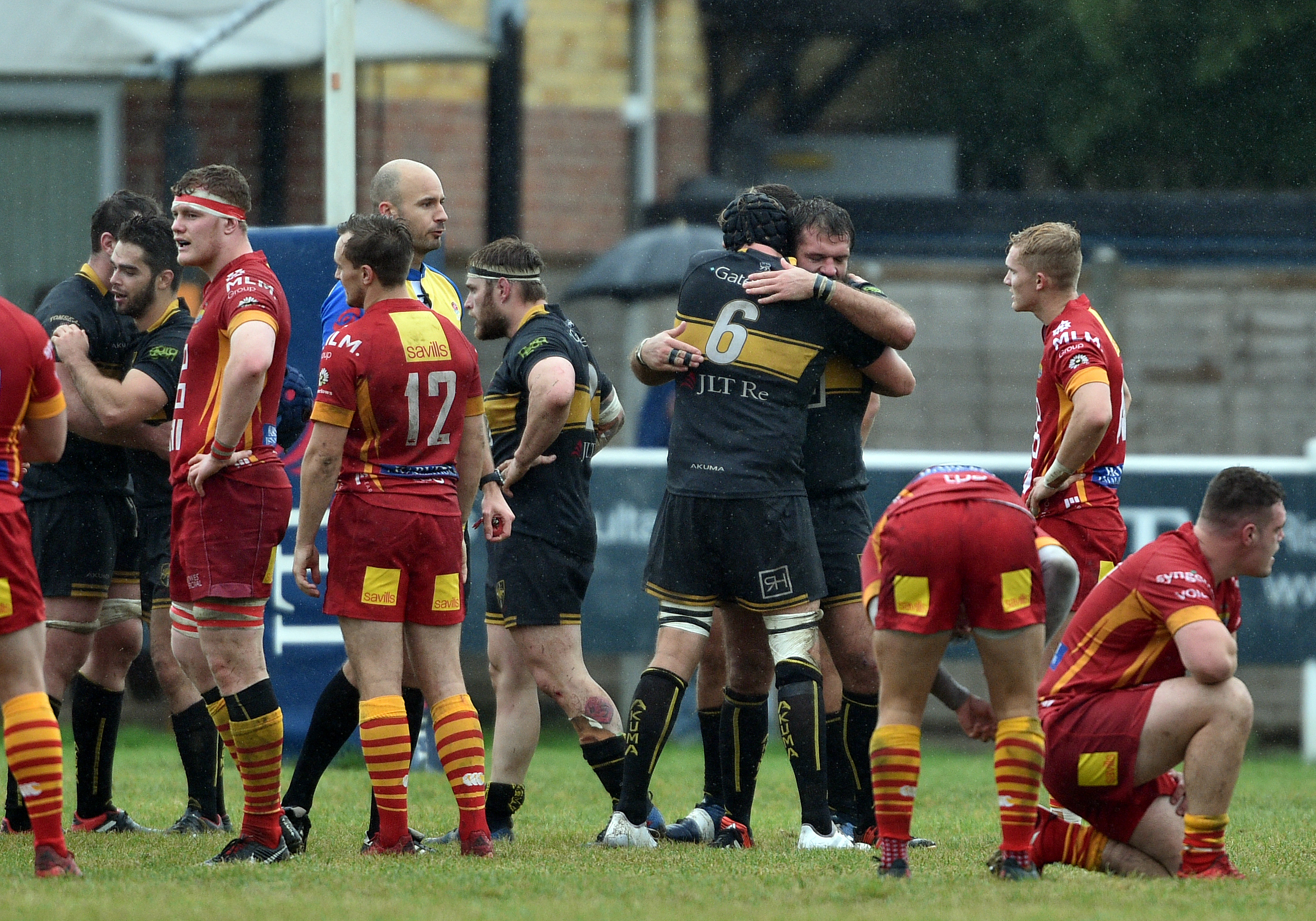 Esher opened their account for the New Year with a thrilling 49-48 victory over 4th placed visitors Ampthill on Saturday.On another afternoon of high drama at Molesey Road, the home team raced into a 30 point lead in the first half, before surviving a late onslaught from the Bedfordshire side to hold on for a valuable bonus point win.

With perhaps an early indication of what was to follow, the visitors opened the scoring after just 4 minutes when a series of carries from the Ampthill forwards created the space for former Esher wing Spencer Sutherland to dive over in the corner.The conversion fell short, but Esher fought straight back from the restart, with second row Devin Montgomery bursting through the defence before being brought down just inside the Ampthill 22.As the Ampthill backs tried to realign, the ball was spread quickly to the left where hooker Devlin Hope was on hand to cut inside and cross for Esher's first score of the match.Paul Roberts added the conversion to give the home side a 7-5 lead with 6 minutes played.

A second try for the hosts quickly followed when a driving maul from the Esher forwards brought them back into the Ampthill 22.With the referee having signalled a penalty advantage, Paul Roberts hoisted a cross-field kick to the left wing, where Kariym Irving found himself in space to gather the ball over the line and score.Roberts added the extras to give Esher a 14-5 lead after 13 minutes.

The home side were playing some of their best rugby of the season at this stage, and they duly increased their lead through a quickfire brace of tries from centre Chris Arnold, with the Esher man first grabbing an interception on the half-way line to score under the posts and then finishing off a break from full-back George Simpson to bring up their bonus point in the 20th minute.Paul Roberts converted both scores to give Esher a 23 point lead.

Esher were in the middle of a purple patch, and things soon got even better for the home side when centre Tom James plucked out another interception just inside the Ampthill half to outpace the pursuing defenders and score under the posts.Roberts slotted the conversion to give Esher a seemingly unassailable 30 point lead with 24 minutes played.

Ampthill had other ideas however, as they responded with a spell of pressure in the Esher 22, resulting in a yellow card for second row Graham Logan for an offence on the try line in the 30th minute.With the away side opting to take the scrum from the resulting penalty, the referee showed no hesitation in awarding the penalty try with Esher's 7 man pack struggling to contain the visitors.

Two more tries from the visitors before the end of the half brought them firmly back into contention, as the Ampthill forwards began to cause problems for the home defence with their powerful ball carrying style.A sweeping move from the visiting backs resulted in a try for wing Sam Baker in the 36th minute, before a driving maul in the Esher 22 sent flanker Joe Bercis over for Ampthill's bonus point try on the stroke of half-time.Both tries went unconverted, leaving the score at the interval Esher 35-Ampthill 22.

After the restart the visitors were enjoying a spell of early possession, but it was Esher who came up with the first score of the half when Devlin Hope intercepted the ball on the half-way line before setting off on a mazy run deep into the Ampthill 22.With Hope brought down just metres from the line, the Esher forwards piled into their opponents, launching multiple phases as they worked the ball from left to right in an attempt to break through.Just when it looked as if Ampthill might hold Esher out however, wing Kariym Irving came into the line at pace and bludgeoned his way through a crowd of defenders to score.Roberts added another conversion to increase Esher's lead to 20 points with 47 minutes played.

More pressure followed from the home side, and when replacement scrum-half Calum Waters placed a probing kick behind the defence, the covering Ampthill player was forced to carry the ball over his own line.After an initial re-set the Esher forwards produced a powerful scrum, driving the Ampthill pack backwards until the referee ran under the posts to award the second penalty try of the afternoon in the 52nd minute.

With Esher now holding another commanding lead, the momentum began to shift back towards the visitors again as the Ampthill forwards rolled up their sleeves and proceeded to hammer away at the home defence.Flanker Joe Bercis crashed over for his second try of the day in the 57th minute, with former Esher fly-half Mickey Wilson adding the conversion, before centre Sam Hanks went over from close range just 10 minutes later.The conversion was unsuccessful, but Esher's lead had been cut to 15 points with 13 minutes left to play.

As the tension began to mount around Molesey Road, Ampthill continued to press forward in search of another score to keep the game alive.The visiting pack were making inroads as they worked their way into the Esher 22, pounding away at the home try line with wave after wave of brutal ball carriers, until the impressive Bercis eventually went over for his third try of the afternoon in the corner.Mickey Wilson added the conversion to reduce Esher's lead to 8 points with just 8 minutes on the clock.

Esher were defending desperately by this stage, but with the clock ticking down Ampthill launched a driving maul from a lineout inside the home 22.The Esher pack initially managed to check the drive, but as Ampthill committed more and more bodies to the move, the maul rolled and rumbled its way over the line with Spencer Sutherland finding himself in the thick of things to come up with the score.Mickey Wilson added the conversion to cut Esher's lead to just 1 point with only 1 minute remaining.

Kicking the restart deep into Ampthill's half, the Esher forwards summoned up one final effort as they pushed their opponents back into their own 22 with some aggressive rucking and determined defending.With the officials having indicated it was the final play however, the game ended in a somewhat bizarre fashion when an Ampthill player decided to kick the ball dead back over his own try line, apparently in the mistaken belief that his side were holding the lead.But with both teams having fought themselves to a standstill, the referee's whistle blew to seal a potentially priceless bonus point win for the home side, and bring a pulsating 15 try epic encounter to its conclusion.