Esher Lions have a great day at UR7s at Basingstoke - Author: Mike Gadbury 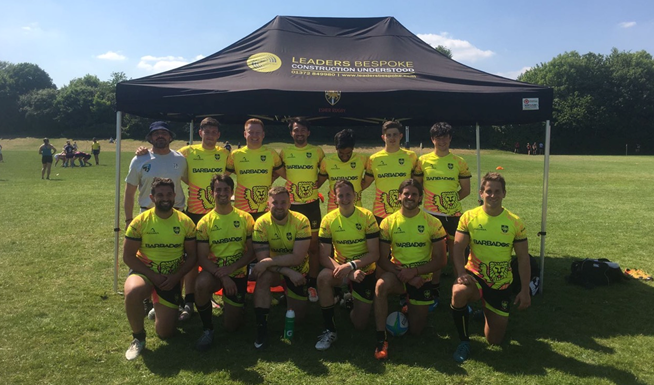 This was an opportunity to take a development squad to the UR7s Social Tournament at Basingstoke, to give a number of players their first sevens competition experience.

The lads started well, beating the Voodoo Priests 24-19 with tries from Whitehead-Farr (2), Basson and Drummond who also kicked 2 conversions. Next up were the Pinks and we were 24-0 down before a spirited comeback made it 24-21 but a breakaway from our final attack saw us lose 31-21.Next up were the Hurn Airport Windsocks and tries from Basson, Dillon and Drummond (converted) saw us win 17-14 and finish second in our pool.

That took us to the Plate semi-final where we came up against Scotty's Tigers. Another thrilling game and a 17-12 win with scores from Basson, Macnamara and Drummond (converted). And so to the Plate Final, and our opponents the Mayans.Our 5th game was just one too far, and we went down 31-14 with Drummond and Whitehead-Farr scoring for us.

A great effort from a new team, and a great day for all concerned.

The Elite squad are next in action on June 2nd at Maidenhead RFC in the second round of the Super Sevens Series. We are in Pool B with the BLK Hurricanes (10.00am) and the.Rambling Jesters (11.20). Subsequent games depend on results in the Pool.

Come along and support the Lions.