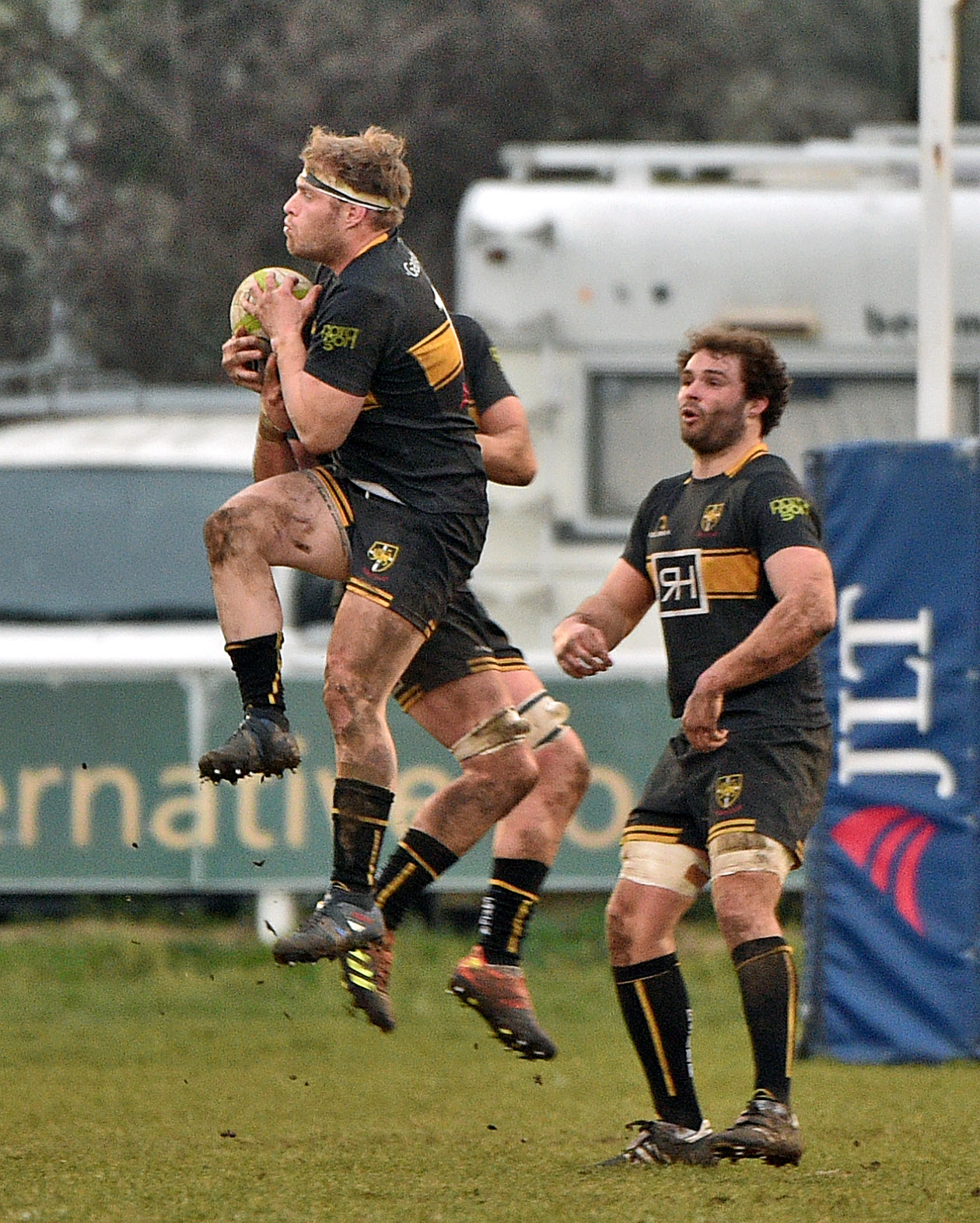 Esher ended their season with a heroic 24-22 bonus point win away to Blackheath, overcoming the south-east London club in a thrilling last day contest, but ultimately coming up just short in their bid for National League One survival as results elsewhere decided their destiny.

Starting the day in need of a win with four tries over one of the division's top sides, Esher's cause was dealt an early blow when Blackheath opened the scoring after just 3 minutes through winger Alex Pickersgill. With the referee having signalled an advantage to the hosts, a speculative kick into the Esher 22 held up in the strong wind before being spilled and rebounding back into the arms of the Blackheath backs. A brief juggle with the ball and quick hands down the line was enough to send Pickersgill over in the corner, with the subsequent conversion falling short.

The visitors responded well to the early setback, seizing possession and launching a lengthy spell of pressure in the Blackheath 22 as they spread the ball around at every opportunity. With Esher's momentum building, Blackheath second row Tom Stradwick was sent to the sin bin just after the 20 minute mark for killing the ball in a dangerous position. Esher continued to press and wereeventually rewarded when No.8 Rob Dudley-Jones crashed over to score in the left-hand corner.Owen Waters added the tricky conversion from the touchline to put his side into the lead with 27 minutes played.

A second try for the visitors followed 6 minutes later when another spell of possession brought them back into the home side's territory.As the Esher forwards worked through the phases, captain Charlie Gossington made a powerful break through the defence, charging forwards at pace before being hauled down just short of the line.The ball was recycled quickly however, with former Blackheath scrum-half Jack Walsh on hand to dive over in the corner and score.Owen Waters narrowly missed with the conversion to leave the score at Blackheath 5-Esher 12.

Esher supporters were starting to believe that the improbable was now becoming a distinct possibility, when winger Joe Beckett raced away from the halfway line to score his side's third try of the afternoon in the 37th minute.With the Esher backs looking to start another attack from their own half, an Owen Waters kick ahead caught in the wind and dropped just behind the Blackheath wing to bounce invitingly into the path of onrushing hooker Jack Musk.Musk beat the first man before passing back infield to put Beckett away with a clear run to the line.Owen Waters slotted the conversion to give Esher a 19-5 lead going into the break.

The hosts made a strong start to the second half, when full-back Leo Fielding made a lightning break from deep within his own half.As the Blackheath backs surged over the halfway line however, the move was brought to an abrupt end when Esher scrum-half Jack Walsh was shown the yellow card for a deliberate knock-on.A sustained spell of pressure ensued from the home side, with Esher's defence eventually being breached when Blackheath flanker Freddie Owen cut through a gap to score under the posts from close range.Fielding added the conversion to make the score Blackheath 12-Esher 19 after 47 minutes.

Both sides were struggling to retain possession in the blustery conditions, but it was Blackheath who came up with the next score when Freddie Owen went over for his second try of the game in the 64thminute.Turning the ball over just inside the Esher half, the Blackheath backs worked the ball out to the left, stretching the visitors' defence before creating the space for Owen to go over in the corner.The attempted conversion fell short, but Esher's lead had now been cut to just 2 points.

The visitors fought back again to bring up their bonus point just 3 minutes later however, when Joe Beckett forced his way over to score in the corner after riding out a high tackle on the try line.A charged down kick from a Blackheath scrum saw Esher regain possession just outside the home 22.The ball was spread quickly to the left towards Beckett, but just when the Esher man looked set to score, Blackheath flanker Harry Bate mistimed his attempted tackle and appeared to catch him with a straight arm to the head.Beckett somehow regained his balance to get over the line though, and the try was duly awarded.After a consultation between the officials, Bate was shown the yellow card and the conversion from Owen Waters struck the outside of the post.The away side had got their four tries, but still had 13 minutes left to defend a 7 point lead.

Esher were continuing to play an expansive game in search of another score to put the result beyond the hosts, but with just 5 minutes to go Blackheath came up with a turnover in the middle of the field to regain the ball.A sharp break down the left and some neat interplay from the backs brought the home side back into the Esher 22, carving out an opening for former Esher man Geoff Griffiths to score Blackheath's bonus point try in the corner.Fielding's conversion went wide of the posts, to leave Esher holding a 2 point lead going into the closing stages.

With just 3 minutes remaining it seemed as if all Esher's hard work would be undone, when an ambitious miss pass in the Blackheath 22 was intercepted by the dangerous Fielding.The Blackheath full-back accelerated away behind the defence towards the corner, but with the try line beckoning, replacement scrum-half Calum Waters epitomised Esher's spirit by racing nearly 70 yards to bring his man down.

At the ensuing breakdown, full-back George Simpson transgressed and was promptly dispatched to the sin bin, with Blackheath kicking to the corner to set up a nerve-shredding finish.Taking the ball from the lineout, the home side were shaping to form a driving maul, but just at the critical moment Esher blindside Harrison Collins came up with a turnover to wrestle the ball back for the visitors.From that point, Esher worked through the phases with a superb display of ball retention, running down the clock until the referee signalled time was up and the ball was gratefully punted over the dead ball line to seal a famous win for the men from Surrey.

As the initial euphoria subsided however, attention turned to other results across the division.And with the Esher players having given everything and more to the cause, the news sadly filtered through onto the pitch that other scores had gone against them and Esher would be playing their rugby in National League Two South next season.But after almost pulling off the great escape, the Esher players and coaching staff will know that they can hold their heads up high as they exit the stage and prepare for a new era.

So whilst today is perhaps a day for reflection and sadness, behind the scenes the fightback has already begun.And Esher will be back!

Have a great summer and see you all back at Molesey Road next season.