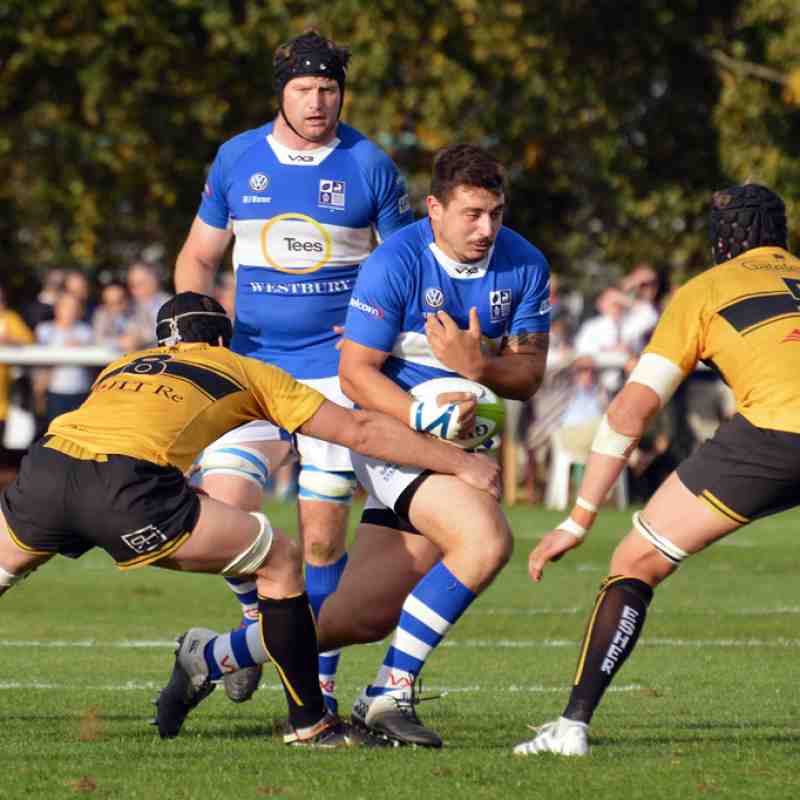 With thanks to John Allanson

In marked contrast to last week's rousing performance at Chinnor, Stortford were lacklustre in the early stages of this game, allowing the visitors an edge in both possession and territory, despite playing into the stiff breeze. Irving's ability to win a number of box kicks was one factor and the rangy winger also proved difficult to tackle, regularly making ground. It was through their forwards, though that Esher registered the first score of the game after 16 minutes, when they drove a maul several metres, before prop, Matt Lowes broke off to plunge over. A good conversion by Owen Waters took the lead to 7. This seemed to sting Stortford into life and a threatening move was halted only by a deliberate knock-on by an Esher three quarter, for which he was yellow-carded after 19 minutes. The home side eventually took advantage of the extra man, scoring an unconverted try through Tom Walker on 27 minutes, after Andy Christie had straightened up the line to create space out wide, but they were still far from firing on all cylinders. Esher again moved onto the front foot and it was their driving maul, once more that proved decisive, as they drove from two successive attacking lineouts to take them almost to the Stortford line. This time, though, after three or four powerful thrusts by the pack, the ball was spun out to fly-half Waters, who easily eluded an attempted tackle to touch down under the posts on 33 minutes, giving himself an easy conversion. This gave his side a deserved 5-14 lead at the break.

Stortford came out in the second half with much more conviction and aggression and showed patience in running through numerous phases to stretch the Esher defence. The visitors held firm for a time but, after 13 minutes they were unable to prevent an excellent individual try by Reuben Bird-Tulloch, who side-stepped past three or four defenders to score under the posts, giving Manu Vunipola an easy conversion. The momentum seemed to have swung in the home side's favour at this stage and a converted try by Matt Tomlinson some 6 minutes later took them into a 5 point lead. This time it was Stortford's turn to drive a maul from a 5 metre lineout for the big second row to touch down. Unfortunately, instead of taking the game by the scruff of the neck, they proceeded to allow Irving to leap and take the restart kick cleanly, setting up good attacking ball, which Waters capitalised on to kick a drop goal via the inside of an upright with barely a minute gone. Stortford swept back onto the attack, though and within 4 minutes were 9 points ahead after Sam Winter went in under the posts from a smart inside pass, after Bird-Tulloch had again threatened to break through. Once again, however, the lead was quickly cut, with Stortford failing to deal with the restart, giving Irving yet another clean run at the high kick, which - surprise, surprise! - he took cleanly and drove on to provide a great attacking platform on the 22. Quick hands down the line saw the other winger, Tom James dive in in the corner and, to rub salt into the gaping wound, Waters made an excellent touchline conversion to narrow the deficit to 2 points. Stortford looked to be rallying again, but a turnover close to halfway was seized on by Esher and some poor tackles allowed ground to be made down the touchline and once again, quick passing left to right was all it took to produce a try out wide on the right scored by replacement, Bradley Clements with 5 minutes to go. Making no mistake with their restart reception, Esher set about trying to run down the clock through their forwards, but conceded a penalty, allowing Stortford to embark on a final assault on the visitors' line. The forwards went close a couple of times and Vunipola was then unlucky, when a clever grubber kick spun onto a post protector, as Bird Tulloch waited to pounce for a certain try. Play was called back for another penalty to Stortford, but the game ended, when the ball was eventually knocked on, as another driving maul was stopped on the line.