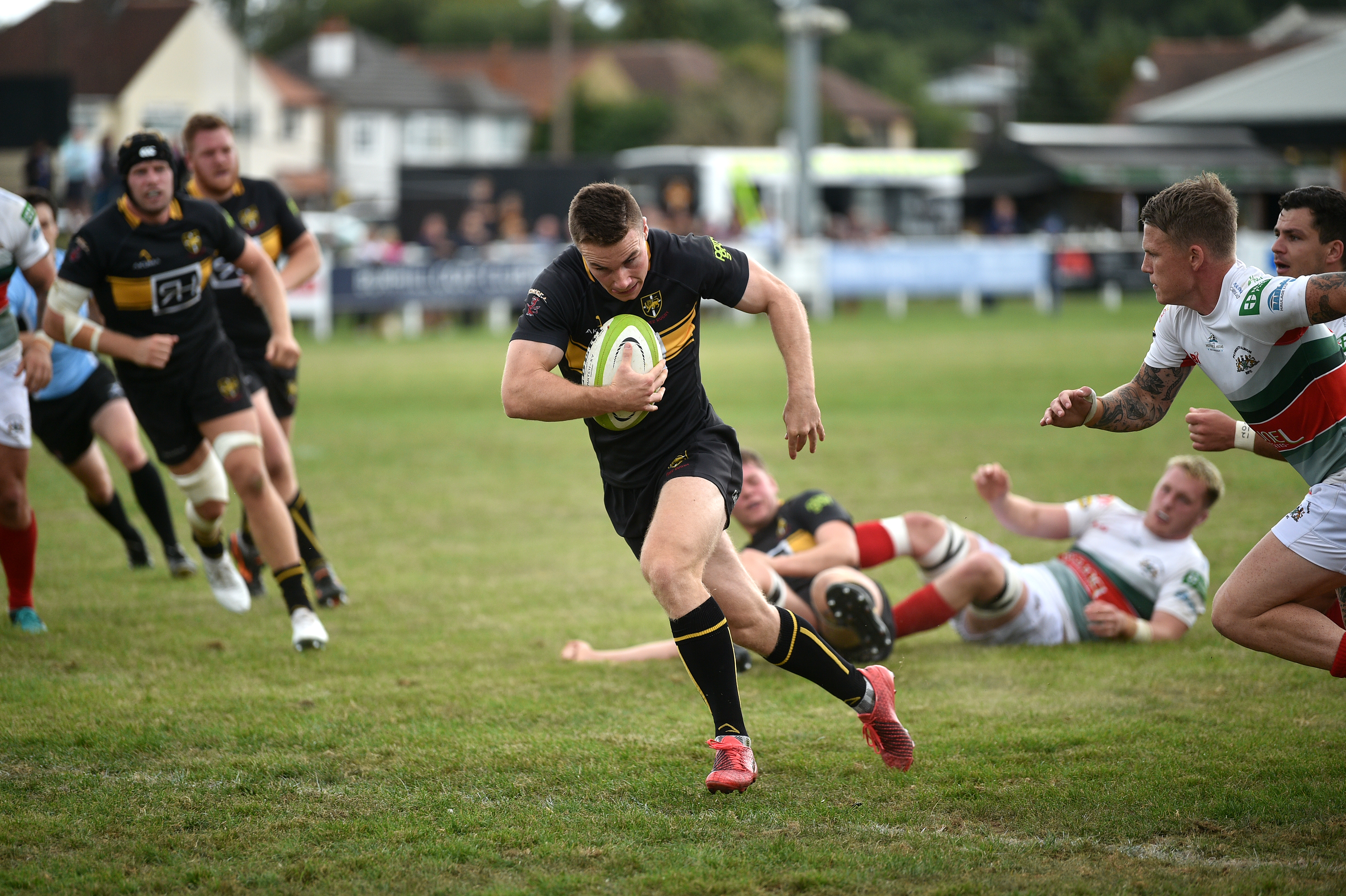 Esher went down to a narrow 24-21 defeat against visitors Plymouth Albion on Saturday, securing their first league point of the season and almost snatching victory in the dying stages, but ultimately coming up just short in a gripping encounter at Molesey Road.

With both teams looking to get their seasons on track following opening day disappointments, it was Esher who were quickest out of the blocks, starting the game brightly and scoring in the first minute through an Owen Waters penalty. The Plymouth response was swift however, with a miss pass creating the space for a break down the right-hand touchline. Esher's defence recovered just in time to halt the move, but the visitors recycled the ball quickly for wing John Dawe to score in the corner. The conversion went wide, leaving the visitors with a 2 point lead after 11 minutes.

Esher regained the lead through another Waters penalty in the 20th minute, before extending their advantage with an opportunistic first try of the match 2 minutes later. With Plymouth opting to carry from the base of a scrum just outside their 22, fly-half Waters somehow managed to wrestle the ball away in the tackle, before accelerating through a gap and diving over to score in the corner. Waters converted his own try from the touchline to bring the score to Esher 13-Plymouth 5.

The visitors responded with another spell of possession in the Esher half, resulting in No.8 Herbie Stupple grounding the ball under the posts after a dominant Plymouth scrum in the 28th minute. Matt Shepherd added the conversion, but Esher came straight back with their second try of the day directly from the restart. Following up his own kick, Owen Waters was on hand to gather the ball from a Plymouth knock-on, racing in behind the defence before putting centre Chris Arnold over in the corner with a perfectly timed floated pass. The conversion was short, to leave the score at Esher 18-Plymouth 10.

Plymouth finished the half strongly and were duly rewarded with their third try of the match shortly before the interval. Esher were defending resiliently, but as the pressure began to mount, home scrum-half Jack Walsh was shown a yellow card for a deliberate knock-on in front of the posts. Declining the opportunity to kick, the visitors went for another scrum, driving forward before spreading the ball out wide for No.8 Stupple to barge over in the left-hand corner. The conversion was unsuccessful, leaving Esher holding a slender 1 point lead at the break.

Ricky Nebbett's team came out firing after the interval, enjoying lengthy spells of possession in the Plymouth half and increasing their lead through another Waters penalty in the 48th minute while still down to 14 men.

The hosts missed the chance to extend their lead further when a penalty kick from Waters clipped the outside of the post, but the Esher forwards were imposing themselves in the loose by this stage and combining well with the backs to stretch the Plymouth defence. More possession followed, and it looked as if Esher might score again when Waters came round on the overlap, carving through the midfield and creating the space for Joe Beckett to run at his opposite number. Unfortunately for the Esher wing however, the final pass ballooned and seemed to take an eternity to land, by which time Beckett had to juggle to keep hold of the ball and the Plymouth defence were able to realign and bring the move to an end.

Plymouth fought their way back into the game again, almost scoring in the left-hand corner but dropping the ball over line at the critical moment. It was only a brief respite for Esher though, as No. 8 Stupple crashed over at close range from a scrum to score his third try of the game and bring up Plymouth's bonus point in the 69th minute. Shepherd added the conversion to give Plymouth a 3 point lead with 11 minutes to play.

Esher were not finished yet though, and proceeded to launch a furious assault on the Plymouth line in the closing stages. The pressure from the Esher forwards was relentless as they set up camp in the visitor's 22, piling into their opponents in search of a killer score to win the game. With treble try scorer Herbie Stupple being sent to the sin bin, it looked as if Esher were destined to go over, but following a third consecutive penalty kick to touch the ball was lost forward and Plymouth were able to regain possession.

As home supporters put their heads in their hands however, Plymouth produced a knock-on of their own from the resulting scrum and Esher suddenly found themselves with one last chance. Molesey Road held its breath as Esher opted to spread the ball wide from what was surely the final play of the match, but just when it seemed that they might find Joe Beckett in space on the wing, the long floated pass was intercepted and Plymouth gratefully kicked to touch to bring a thrilling contest to its conclusion.

“We’d won in Paris and there was no way was I goin...
The Esher 1st XV to face Plymouth Albion.